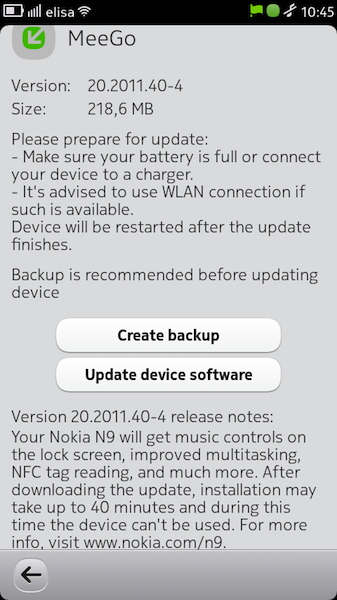 Last week we talked to Nokia about their forthcoming update for the Nokia N9, and today it seems the company has gone live with it already. 1.1 brings lots of great goodies, and the company says that it'll be available really soon for all.

According to a post on their support forums, the update brings:

And there's more in the update they didn't mention too. We're personally really excited to get the performance tweaks and Swype for typing. The company plans on releasing more updates for MeeGo on the N9 into 2012, with 1.2 already being worked on. We guess the platform isn't so dead after all!

You'll see a software update notification if it's available for you, however the company notes that it is being pushed in waves to users. We'll report in full once it gets to our N9!