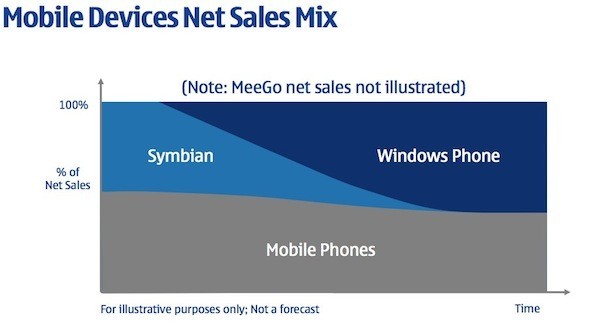 Nokia has finally come forward and stated that they will be adopting Windows Phone 7 and will be dropping Symbian for their smartphone platforms. The news has been rumored for some time but was finally made official this morning.

The image posted above shows Nokia's plan to rid itself of Symbian and take on the newest OS on the market, Windows Phone 7. Nokia has been struggling to keep it's head above water, so its choice to dump Symbian in favor of Windows Phone 7 is arguably a last ditch effort to become competitive in the high end marketplace.

The move for Microsoft represents a huge victory as Nokia still has a strong brand reputation despite its fledging sales. If Nokia is able to push the platform, it will also help Microsoft in its conquest for its platform to become a major player in the mobile operating system market.

The move seems logical as the Symbian platform has seen its ship sail. The platform, that was once a dominant player in the industry, has failed to adapt and develop a modern ecosystem that is necessary for prosperity and growth.