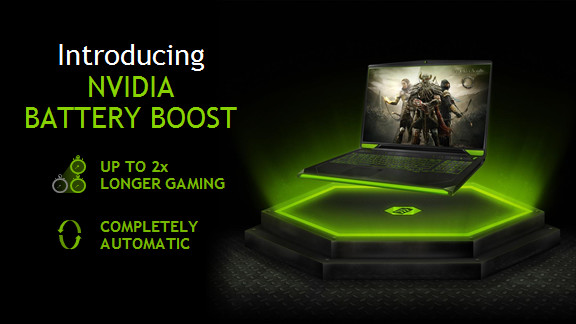 PC gamers who owns notebooks know that when the power cord is no longer connected, it sometimes can take an hour, or even less, to drain its battery due to the amount of CPU and GPU activity when playing many games. Today, NVIDIA claims that their new family of GTX 800M mobile GPUs will help solve that issue with a feature called Battery Boost.

The company claims that people who own notebooks with a member of the GTX 800M series inside will notice the effects immediately. NVIDIA says:

To achieve this feat Battery Boost adjusts the power needs of the GPU, CPU, and memory automatically to deliver a user-targeted frame rate (30 FPS by default). Each notebook component is adjusted in real-time, maximizing efficiency, and ensuring buttery smooth gameplay, even when the action heats up during high-intensity moments.

Of course, the GTX 800M chips are faster than previous NVIDIA mobile graphics processors. The company estimates that the 800M series have between 15 and 60 percent better performance. The chips have also been designed to be thinner and lighter, which will also make notebooks smaller. The GTX 800M series will be inside a number of gaming notebooks later this spring, including Razer's new Blade laptops.