AMD has been talking a lot lately about their new Mantle graphics API, which they claim offers better performance for the PC games that support it and run on the company's Radeon chips. Today, NVIDIA fired back with a new beta driver for its GeForce cards, claiming that its performance actually beats Mantle in the three games that use the API.

At the moment, only three PC games support the Mantle API and drivers; Battlefield 4, Thief and the free Star Swarm demo. Today's release of the NVIDIA GeForce 337.50 beta drivers comes with this claim from the company:

Compared to our competitor’s new, much-discussed API, our testing found the combination of the new 337.50 Beta drivers, and DirectX 11, to offer a faster experience with suitably-matched hardware, as found in enthusiast systems: 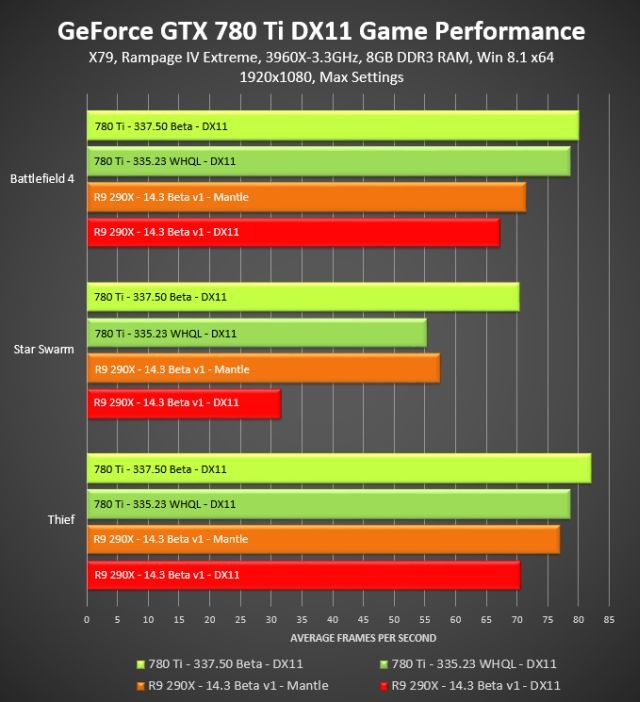 NVIDIA offers a graph showing what they claim are the benchmarks for the three AMD Mantle API PC games compared to those same titles running under NVIDIA's 377.50 beta drivers and the current 335.23 version. The graph shows that the frame rates for those games under the NVIDIA drivers are ahead of those with AMD and Radeon with a GeForce GTX 780 Ti graphics card. The new beta drivers are also supposed to boost performance in a number of other DirectX 11 based PC games by as much as 71 percent, depending on the game and hardware.

NVIDIA also released version 2.0 of its GeForce Experience software, which was made to automatically optimize PC game settings. The new version allows for live footage of PC games to be captured and/or streamed on windowed games, borderless windowed games, and from the desktop. It also allows for gameplay footage to be captured on notebooks that have NVIDIA Kepler and Maxwell based mobile GTX GPUs.