We are only a day away from Nvidia's special event where it's expected that the company will unveil its next-gen GeForce RTX 30 series gaming GPUs. Naturally, with an impending launch like this, a few leaks here and there are bound to happen. From previous ones, we have come to know of the rumored performance and such, as well as the debut of a new a 12-pin PCIe power connector (confirmed later by Nvidia).

Today, alleged custom RTX 30 series designs from AIBs ASUS and Gainward have been spotted. The ASUS one seems to be a standard ROG design that gamers know and love. It's a top view of a supposed RTX 3090 STRIX model showcasing the card in its full glory. ROG logos are plastered over its coolers and the card appears to be 2.5 slots wide, which is to be expected from such high-end models with beefy cooling. 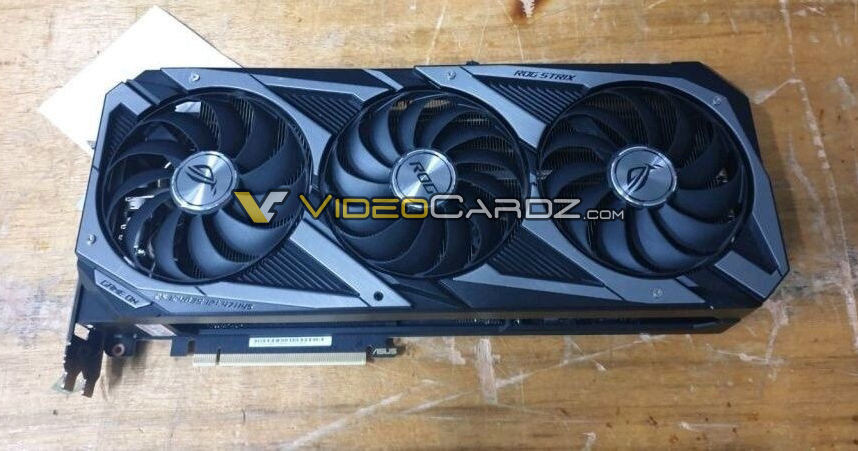 Next in line and by far the more interesting one of the two comes from Nvidia-exclusive AIB Gainward, who appeared to have mistakenly updated its website with all the near-final specifications information and marketing material of its upcoming Phoenix RTX 3090 and 3080 models, four variants in total. And although they seem to be have been removed now, Twitter user @harukaze5719 managed to take screenshots of the specifications they could be launching with.

The "GS" in the nomenclature indicates Golden Sample which are binned parts that could be expected to boost higher while the non-GS variants appear to have slightly lower boost speeds, and will likely be cheaper too.

Update: Corrected the source of the news.