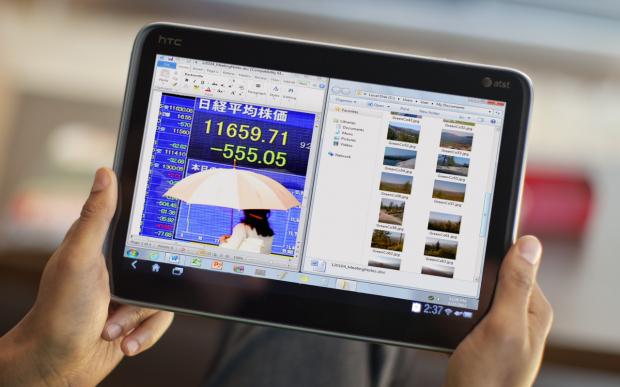 The cloud-based streaming game service OnLive has already brought a way for iPad users to access and use Microsoft Office programs and Internet Explorer 9. Now the company has extended that support to another platform. The company revealed today that a number of Android-based tablets can now run Microsoft Office and IE 9 via their OnLive Desktop service.

The tablets that currently support OnLive Desktop include the Acer Iconia Tab A500, the ASUS Eee TF101, the Motorola Xoom, the Samsung Galaxy Tab 8.9 and 10.1, and the HTC Jetstream. Those tablets can now download the free OnLive Desktop app via the Android Market.

As with the iPad version, the Android tablet port of OnLive Desktop has two versions. The free version lets users access several Microsoft Office programs via a 3G, 4G or WiFi connection, including Microsoft Word, Microsoft Excel, and Microsoft PowerPoint. Adobe Reader is also supported in the free version and users get 2GB of storage.

The OnLive Desktop Plus service, which costs $4.99 a month, adds support for running IE 9 on the Android tablets at super-fast speeds thanks to OnLive's cloud servers; OnLive Desktop support for smartphones, PCs, Macs and televisions is still in the works.