With the nominations of the Oscars named just a few days ago I wondered how many of the movies nominated have actually been seen by people at home rather then the cinema in the form of piracy. Of course no website gives out that kind of information but there is a blog post that was featured on slashfilm that gave some shocking figures. 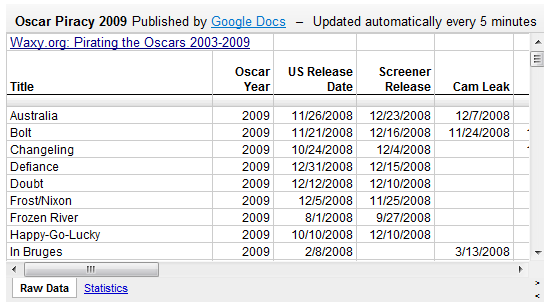 Displayed above is a small section of a list of films (see full list here over the last 7 years that have been nominated in some form or another for an Oscar. In the years Andy Baio has been researching this information he has found some quite shocking statistics regarding the piracy of the nominees.

This year the battle for the 2009 Oscars is quite close but for anyone that doesn't go to the cinema the films are unfortunately easy to find on the internet, as part of Andy's research he found out that 23 out of the 26 films have been leaked and this is a long time before the nominations were even decided upon and strangely Academy Judges only get 20 of them to review.

The time between the judges receiving the DVD and the film actually getting leaked to the internet takes about 6 days and sometimes quicker if you count the camcorder copies that are released. It's been recently documented that cinema's are trying to stop the piracy of films via the camcorder. For example a VUE cinema in Pilsworth, UK is now asking customers to sign in and let their bags be checked before they go to see a film. This policy isn't in place just on weekdays either but at the weekends which is the busiest times for some cinemas. Odeon staff regularly use night vision binoculars looking for the pirates in action on opening nights of big budget films.

So what could the MPAA do about the films being leaked on the internet? Well actually not a lot, they could put a shield on the CD's like there are on PC games but that would be cracked very quickly and the piracy would continue or maybe they could let the judges watch the films in group screenings so they aren't sent out and pirated. Whatever does happen 2009 won't be the last year films are pirated if previous years are to go by.