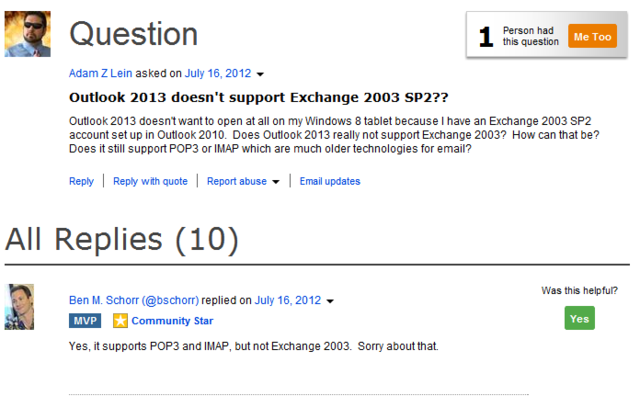 When Microsoft finally pulled the covers back on Office 2013, they were also announcing at the same time the end of support for several platforms. We have already highlighted that Office 2013 will not support XP or Vista, but we are also now seeing that Exchange 2003 will no longer be supported.

Exchange 2003 was released in September of 2003 which means that the platform is nearly ten years old, so it is not surprising that Microsoft has decided to drop support for the aging platform. Microsoft is known for its legacy support of its own platforms but the company does have to draw the line somewhere. If the company is forced to support its products forever, the platforms become bloated and overhead costs skyrocket.

If you are on 2003, it is best to upgrade at this point. Seeing how old the platform is, there are tons of new features in the newer editions of Exchange and the security and stability updates are worth the price of entry.

The removal of support is not all that surprising either. When Microsoft updates their Office platform, they typically drop support for one version of Exchange; Outlook 2010 did not support Exchange 2000.

If you missed the all the announcement yesterday around Office 2013, you can find them all here.