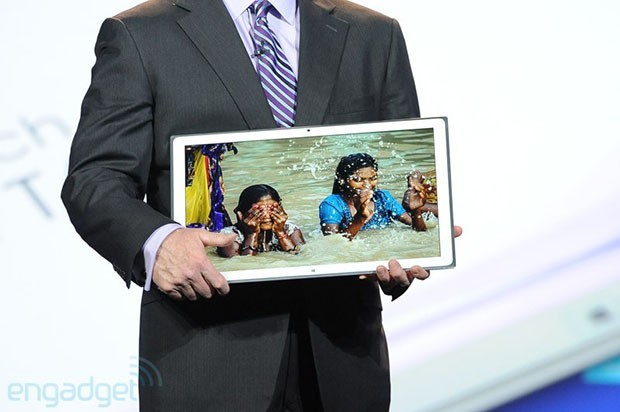 If there is one trend that we have noticed going on at CES 2013 when it comes to new Windows 8 products, it's "Bigger is better." So far, we have seen Lenovo talk about their upcoming 27-inch all-in-one PC that can also be used as a tablet, and Asus has a new AIO that's 18.4 inches with a screen that can detach to work as a tablet as well.

Today, as part of their CES 2013 press conference, Panasonic made the surprise announcement it would be releasing a 20-inch Windows 8 tablet as well. The product was shown on stage and it will apparently have a screen resolution that Panasonic is claiming will be of the "4K" variety. A specific resolution size was not reported.

Engadget reports that the unnamed Panasonic tablet will come with a stylus that will help the product perform some interesting features, but details were not forthcoming. This appears to be a real tablet, and not just an all-in-one PC that can be used as a tablet.

Pricing and a release date for this new Panasonic Windows 8 product have not been revealed, but if any more info on this device is announced at CES 2013 we will update this post. It's an interesting change for Panasonic, which in the past has released its Toughbook lineup of notebooks but has done little else in the PC hardware space.