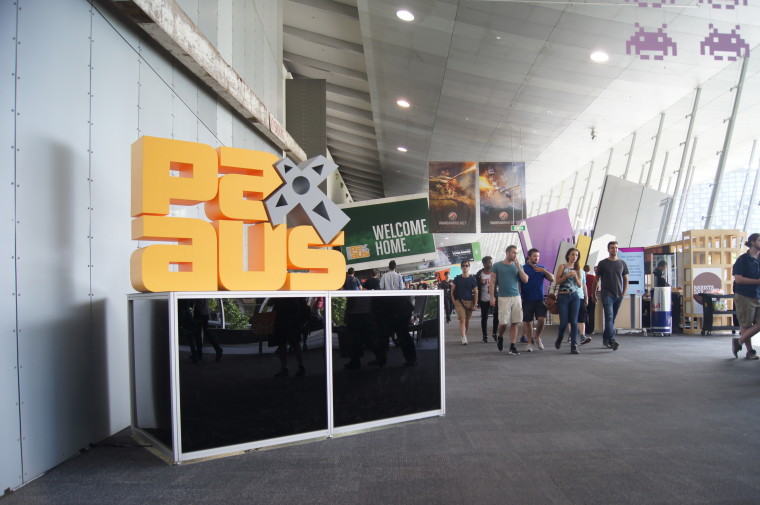 After last year’s PAX, developer Michael Ventnor decided to make and design his own game. After a long day at work, Ventnor says people want a simple game that can be played in quick rounds, similar to the successful Rocket League or Mario Kart.

“Anyone can pick it up and play it within seconds. It is a game that caters to everyone’s tastes because everyone seems to get it.”

Similar to an animated, chaotic dodgeball, players must collect three balls where they can choose to shoot hadoukens at each other, or shield themselves. The players must then aim to eliminate each other. It is very simple and downright addictive. Available on Steam via Windows, Mac and Linux.

Described as an intergalactic party racing mayhem, Spacedust Racers is a mix between multiplayer classics Mario Kart, Crash Team Racing and Mashed. Director and Senior Artist Grigor Pedrioli says the support for up to 16 players offline will make for a frantic gaming session.

“You can get 16 mates around, you can plug your smartphone in and use it as a hub and play offline, or you can hop on online. Designed for hardcore gamers, and younger gamers.”

Players can use weapon power ups and their vehicles to annihilate victims, with the aim of being the last one standing. It’s a simple, easy-to grasp concept that won’t be unfamiliar to old-school console gamers, but is hard to master. Spacedust Racers will be available on early next year on Steam, Xbox One and PS4.

Students from Canberra’s Academy of Interactive Entertainment initially began the project for a competition, but has since promoted the game and taken it onto the big stage at PAX. Described by programmer Adam Short as a multiplayer competitive stair climbing game designed to "ruin friendships,” players are designated as a runner or gunner. The gunner's role is to fire beach balls at the runners, while they attempt to reach the top. Apart from the beach balls, players must also avoid land mines and other hazards. The team are yet to expand the game, and have raised 30% of their $12,000 target on Kickstarter with the hope of doing so. Death Stair is available on Steam now for PC.

Evergreen is a PC game where the aim is to literally grow a tree. As dull as it may sound, the zen-like game actually provides a calming and enthralling gaming experience as users guide the tree to growth. The dynamic environment, such as the weather and animals, also react to the appearance of your creation. The game is an innovative idea, and proves that games do not have to be fast-paced and chaotic in order to be entertaining. The game will be released early next year on Steam, Humble Store and various other outlets.