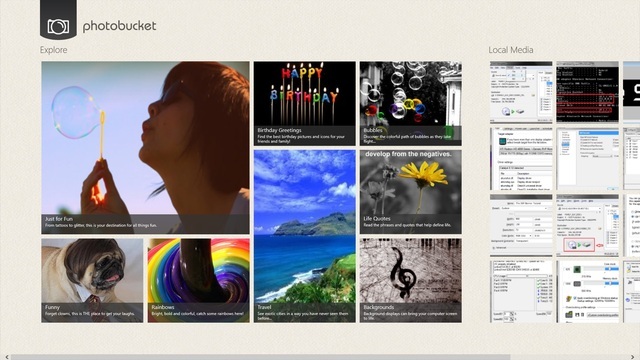 If you have just finished downloading the Windows 8 Consumer Preview, you may be wondering if there are any worthy apps to download from the newly opened Windows Store. In that case, the folks at the photo and video sharing service Photobucket would like for you to consider checking out their newly launched Windows 8 Metro app.

The official Photobucket blog site has more information on the free app which was designed specifically to take advantage of the touch screen features of the Metro interface. Users can search through the nearly 10 billion photos that have been uploaded on Photobucket.com via the Metro app, and they can also use the app to capture and upload photos to Photobucket directly from their Windows 8-based PCs.

The app's Metro interface gives its users full access to Photobucket's album and photo management features. There are also a number of social networking features in the app, including being able to comment and "like" photos and sharing them with others. Finally the Windows 8 Photobucket app also can access the Windows 8 File Picker feature.

While the Photobucket app is free to download for the Windows 8 Consumer Preview version, there's no word if people will have to pay for the app when the final version of Windows 8 is released.