There are many services offering the ability to upload and store images, and almost all of them come with some method of placing images into categories. Microsoft's Photosynth differs from the crowd somewhat, allowing you to take panoramic images which will be stitched together, and can then be uploaded to services such as Facebook. Panoramic images have always been beneficial in certain situations, and some phones do come with the ability to create panoramas by default.

News from Liveside.net points to a version of the app in the works for Windows Phone. The official website for Photosynth features newer images, and Brazilian website Gemind observed that images were taken from a variety of Windows Phone devices, including the Nokia Lumia 800. Other phones included the HTC Radar, Samsung Focus, and HTC HD7 were also used in testing, which would seem to point to work on an app commencing. Gemind went one step further, finding a synth image on the site which points to a version of the application in testing for Windows Phone. 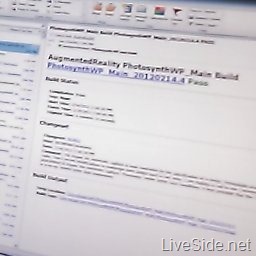 While blurry, we can make out the larger bold text, which reads:

Below this, the category headers appear to be 'Build Status', 'Changed', and 'Build Updates', but we cannot be sure of this due to the blurriness of the image, which seems to be part and parcel of any and all leaked information. With this information though it does seem that a Photosynth app for Windows Phone could be releasing in the near future, after the feature was unfortunately not built into the Mango update for the mobile operating system.