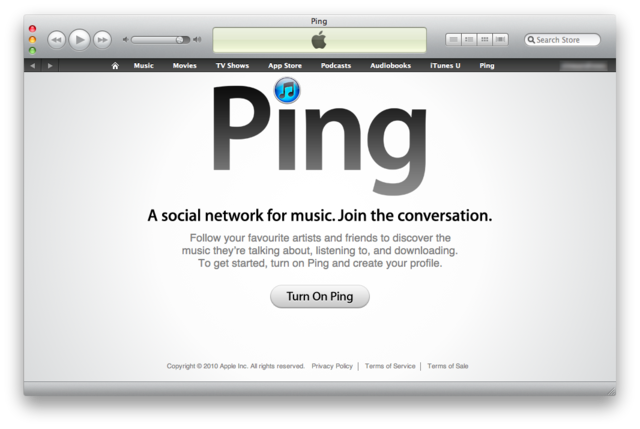 Just hours ago, Apple announced their new "Ping" social network, along with the latest update to iTunes. The software update has gone live, and Neowin has given the new social network a quick testing. While the service is still in its infancy, and therefore doesn’t have a whole lot to look at, this early look does give a nice sneak peek at what’s to come as more and more iTunes users sign up for the service.

Registering is pretty straightforward - just select “Ping” from the iTunes sidebar, log into your iTunes account, and create a basic profile. It then gives you a chance to “like” some of your music - it seems to auto populate with some music you’ve recently purchased, although the music it selected for me wasn’t quite what I expected. It chose two songs for me, from the two most recent albums I purchased, but there was nothing particularly special about them - their play count wasn’t higher than anything else, and I hadn’t rated them.

After setting up your profile and liking some music, you’re presented with a very simple “Welcome to Ping” screen. You’re given three immediate options: “Search for People or Artists”, “Invite Your Friends by Email”, and “Connect iTunes Ping with Facebook.” The third option is probably your best bet - it only found two of my friends from Facebook on Ping, but I began the process within an hour of the service launching. I could follow these friends without any issue, and they popped up in my “Recent Activity” feed instantly.

There are two kinds of people you can follow on Ping: people and artists. Facebook is great for finding your friends on Ping, but artists will most likely be found using the “Artists We Recommend You Follow” section or “Search for People or Artists.” Again, the service is so new that there’s very few artists to follow right now anyway - only 14 are recommended for “me,” and one of my colleagues seems to have the exact same recommendations. The content will - likely - fill up over the next few days.

The “Recent Activity” feed offers the equivalent of Facebook’s “News Feed,” but, of course, for music. You can see who started following who, and also recent purchases. In my case, one of the people I started following had just bought an album, and that showed up within “Recent Activity.” At the click of a button, I could preview or buy the album. 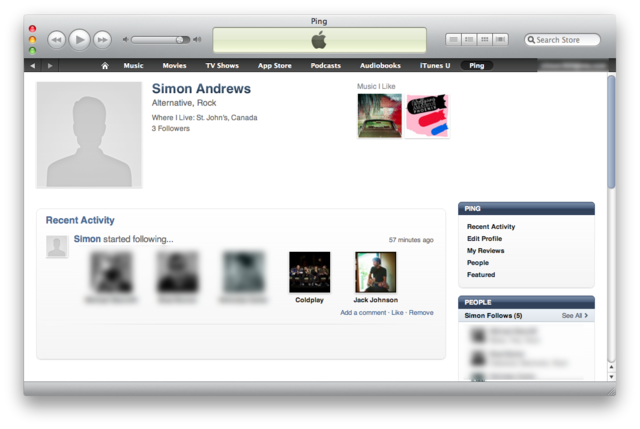 One thing that is notably missing, however, is the ability to use the network from outside iTunes. Having a social network tied to an application is a different approach - although Microsoft did also try it with the Zune Social - but if this is going to be a true success, there needs to be a way to access the network from outside the Apple ecosystem. An online, in-browser interface would be the obvious solution here, but there’s no hint of that here yet. It would be nice if it also tied into Facebook in some way beyond grabbing your friends list.

Also, it appears that iTunes ping is not yet active on the iPad, iPhone and iPod Touch; however, that is expected to go live in the near future.

Overall, it’s difficult to judge whether or not iTunes Ping will become the mega social network Apple wants it to be; however, many are already calling it a “MySpace killer.” At this point, it’s really too early to judge, but by the looks of it, the service could become a great way to share your music taste amongst your group of friends - so long as your friends are happy using iTunes to do it.