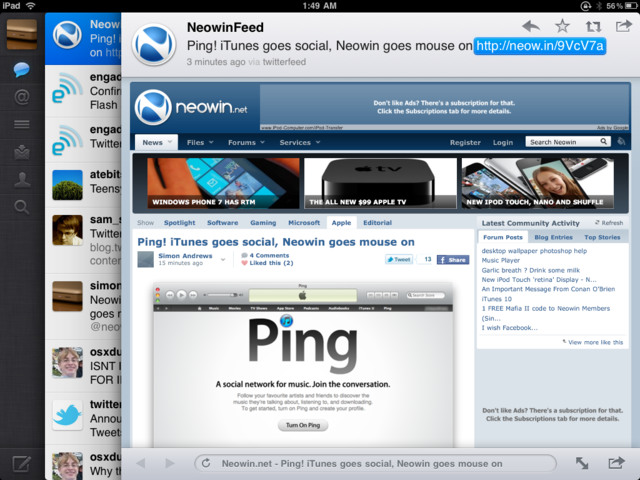 Twitter has announced, via their blog, that their official Twitter application for Apple's iPad has been approved, and should now appear on the App Store worldwide. The app features several new features when compared with its iPhone counterpart, including panes, better media support, and enhanced gestures. Overall, the app has been made more tablet friendly, putting good use to the extra screen real estate provided by the iPad's 10 inch screen.

The application shares more with Tweetie, the desktop application made by Atebits before Twitter purchased them earlier this year, than with the iPhone version. Panes offer an almost window-like interface, showing a sidebar to switch between your Twitter feed, direct messages, search, and the like, as well as a pane in the middle for the Twitter feed. As you tap content within a tweet, more panes open up, displaying content enclosed within a particular tweet, or information about the poster. As you drill down further, more panes open.

Switching between panes is as simple as swiping left or right, and panes open by simply tapping content in a tweet or website. Even while a pane remains open, you can view your Twitter timeline by swiping to the left, and then swipe right again to return back to the pane you were in.

Twitter has also added some nice multi touch functionality to the application, so that if you pinch outward on a tweet, you can view some information about that person. Additionally, placing two fingers on a tweet and dragging down allows you to view replies to that tweet.

Twitter for iPad is offered as a universal app that will run on the iPhone and iPad, adjusting its interface accordingly. It's available for free on the app store.