Earlier this week Serebii.net posted a rumour that a new Pokemon game would be announced this week on the Japanese Pokemon Variety Show. With the announcement Nintendo would be creating merchandise featuring the Johto region starter Pokemon, it was looking more and more likely.

However the show came and went and no game was announced, but there was a small easter egg for eagle eyed viewers. At one point in the show, large silver and gold balls were seen dangling above the stage. This sparked rumour online that remakes of Pokemon Gold and Silver were in the works. 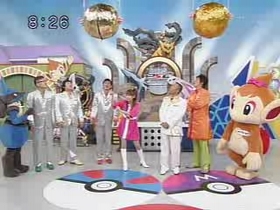 Today Nintendo confirmed those rumours and the official website went online, for the now renamed Pokemon Heart Gold and Pokemon Soul Silver games. They will release later this year in Japan for the Nintendo DS. Not much is known about either game yet and what changes have been made. More details are expected this week on Pokemon Sunday.

Pokemon Gold and Silver are arguably the most popular games in the series and were released at the peak of Pokemon's popularity in 2000 for the GameBoy Colour.

It's not the first time the Pokemon games have been remade. Red and Green were both remade for the Gameboy Advance and released in early 2004. With the 10th anniversary of Pokemon Gold and Silver soon approaching it will surely please fans to see the game remade. Presumably the other games will also see a remake sometime in the future.