This year has been somewhat of a mixed bag for PlayerUnknown's Battlegrounds having officially landed its 1.0 release for Xbox One in September but PUBG Corp has struggled to stem the exodus of the game's player base that has fallen from its peak of 3.2 million players in January to 1.7 million in June. In fact, it appears that figure could fall below one million this month given the current trend as captured by Steam Charts at the time of writing. 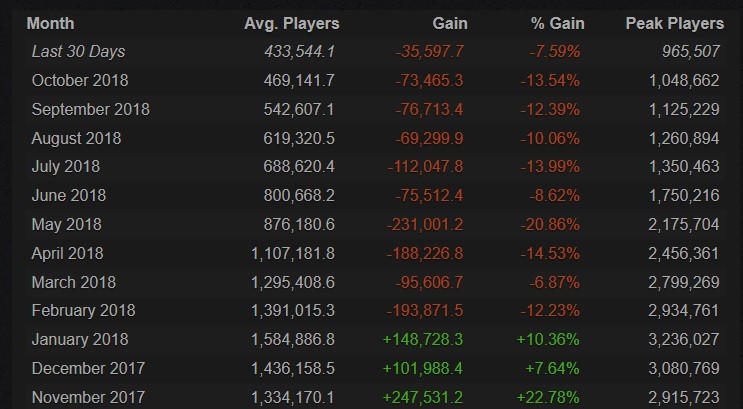 In a bid to deal with a number of issues encompassing client/server performance, anti-cheat, matchmaking, and bug fix and quality of life issues, PUBG Corp launched its "Fix PUBG" campaign. Having kicked off in August and with delivery timeframes lasting until October for several remedial categories, the studio has now declared the campaign complete according to a dev letter posted on Steam by Executive Producer Taeseok Jang.

Please read our latest Dev Letter focused on the results of the FIX PUBG campaign along with a look forward at our future goals.https://t.co/eJGDjiADLI pic.twitter.com/SDuH7uC2oW

However, in light of the declining player numbers, it is interesting to note the number of accounts banned during the lifetime of Fix PUBG, pegged at "over two million". Jang also advised that the studio will continue to examine "new anti-cheat solutions, while at the same time exploring external solutions such as police investigations and legal action" and the introduction of hardware bans to target those who spin up new accounts in order to keep cheating.

Bug fixes and "quality of life" improvements were also talked up, with one hundred items dealt with during the course of the initiative, although the Executive Producer expressed the studio's disappointment that it had grown to such an extent in the first instance. Moving forward, he signaled a higher emphasis on quality assurance and a new bug submission and tracking system for players to report issues they come across.

While "Fix PUBG" has wrapped up, Jang did note that:

"We know there are many things to improve upon, but we do have a sense that we more accurately feel what you, the players want and need. While this is the end of the FIX PUBG campaign, we will go forward in our development, improve our processes, and redouble our efforts with the lessons learned."

Of course, time will tell how true this turns out to be in light of PUBG slated to hit the PlayStation 4 on December 7, becoming the third non-mobile gaming platform to pick up the title. However, for some, the horse may have well and truly bolted.