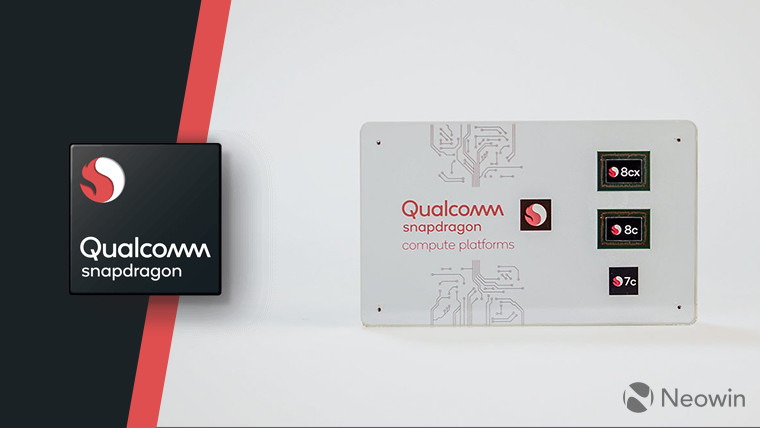 At Snapdragon Technology Summit in 2016, Qualcomm and Microsoft first announced Windows 10 on ARM, and their plans to run x86 apps in emulation to avoid another Windows RT fiasco. The platform has evolved rapidly since then, as Qualcomm announced the Snapdragon 8cx at last year's Tech Summit, making it the first ARM chipset built from the ground up for PCs, rather than a reworked mobile chipset.

While the Snapdragon 850 continued to be produced in lower end tiers, that's about to be discontinued. Today on day three of Snapdragon Technology Summit 2019, Qualcomm announced a couple more PC chipsets, both of which are made for PC only, like the 8cx.

The Snapdragon 7c, on the other hand, includes a Kryo 468 CPU and an Adreno 618 GPU, and a five-TOPS AI Engine. It has a Snapdragon X15 cellular modem, and that's going to be a big value proposition of the 7c. There are few, if any, cellular PCs at the price point that these will be coming in at.

Qualcomm also didn't say when these PCs will be arriving, possibly because it's kind of behind schedule with what it promised last year. The Snapdragon 8cx has only been announced in the Samsung Galaxy Book S (other than Microsoft's custom one in the Surface Pro X), and that's delayed until next year. There were supposed to be more OEMs using it as well, and there were supposed to be new mid-range PCs with the Snapdragon 850, which haven't arrived.

There's one more announcement though, which is a third flavor of the Snapdragon 8cx, the second one being the 5G variant. This is the Snapdragon 8cx Enterprise Compute Platform. You might recall that when the 8cx was first introduced, there were a bunch of enterprise announcements that happened, such as support for Windows 10 Enterprise. The idea behind the 8cx Enterprise is to add some hardware security features and connected security software, probably similar to what Intel does with vPro.

Again, Qualcomm didn't say when any of this is coming to market, but we should have more information on that soon.