For the uninitiated, the Steam controller will forever be relegated to the zeitgeist of failed tech. For the average Steam fire sale buyer, it is a misunderstood Swiss-army knife collecting dust under a monitor behind an overpriced mechanical keyboard. For the lurkers of /r/steamcontroller, it is a capable device that lends extra flexibility to gaming experiences. Just ask RambleTan.

Redditor /u/nikoaj gives evidence of this with his 3D-printed Steam controller mount. On the surface, it looks like one of those controller anchors that game console kiosks use at retail, but upon further inspection there is a cool parlor trick. This device leverages the power of Steam Input to transform gyro inputs into a controlled range of motion.

Steam Input is quite flexible. Not only does it allow compatibility with modern controllers like the DualSense, it also allows the user to remap any and all inputs and outputs. The Steam controller has gyro controls that can be activated in a number of ways, and you an even change its output to be a joystick. 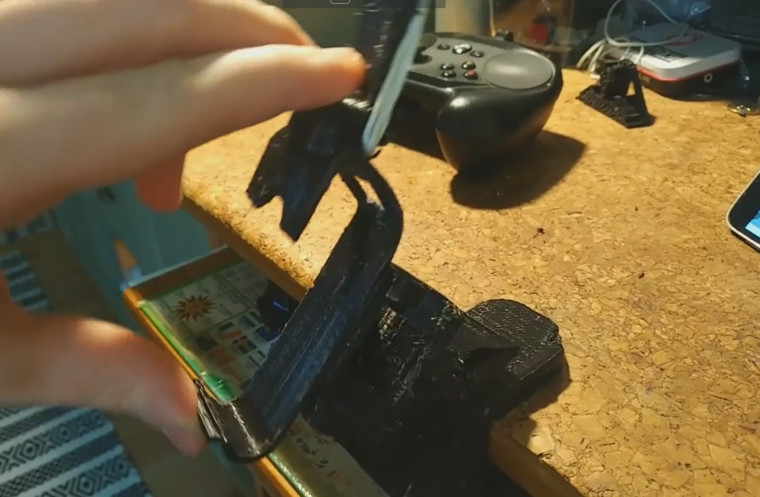 That's what this device aims to improve upon. Gyro controls offer a lot of control to the player, but it lacks boundaries. Joysticks have a 'gate' that imposes these boundaries on the player so that you can only go so far, or easily find the center. However, this is not just a 3D-print. This is a real, working joystick mechanism that allows the player to snap back to center just by letting go.

/u/nikoaj explains the purpose behind the project.

At first i wanted to make yoke control for flying. But i wasn't sure if i ll be able to configure steam controller properly, so i made this instead. Now it has limited range of motion but it's self centering when i let it go. -/r/nikoaj