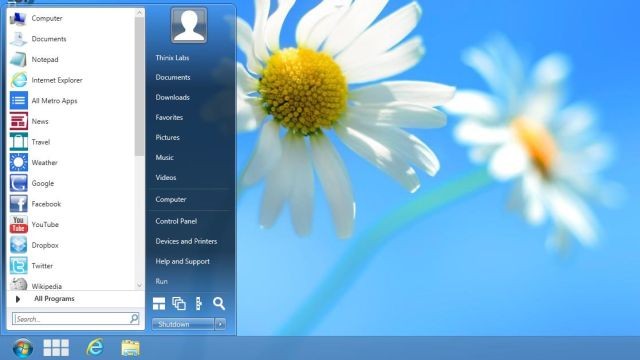 Software developer Thinix has released a number of versions of its Windows 8 Start menu program RetroUI over the past several months. Now the company has launched a major new update for RetroUI, which brings its version number up to 3.0.

This new version includes something that a number of people might like; a true 'retro" Windows 7 style Start menu for the Windows 8 desktop, with features like integrated search, right click context menus and a way to drag and drop items in the menu.

If you like the Start screen and the 'Metro' UI, the new RetroUI 3.0 has you covered as well. It includes a new 'SuperSize' feature that lets Windows 8 apps and the Start screen span across multiple PC monitors. The new version of the program's Metro App launcher now allows all Metro apps to be launched from the Start Menu and the program's TabletView.

Other new features in RetroUI 3.0 include the ability for the Start Menu to adjust its color to a user's Windows 8 color choice. Metro apps can now have their starting size set as a percentage of the desktop and Metro apps can now "snap" to fill half the screen for those users with large monitors.

The program is available for download now for $4.95 for use on one PC or a version for $9.95 that can be used by up to three PCs. You can also get a seven day free trial version and there are other versions made for business and educational use.