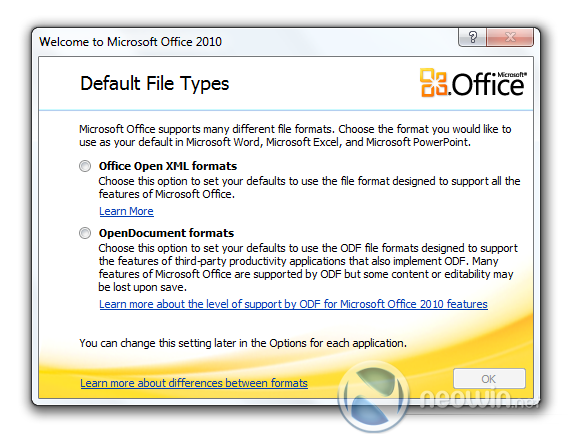 Microsoft has made several changes to a Release Candidate version of Office 2010 made available to testers recently. One change in particular prompts users whether they want to use Office Open XML (OOXML) or OpenDocument (ODF) document formats. The prompt only appears in European SKUs of Microsoft Office 2010.

Microsoft announced the ballot screen prompt plans for Office 2010 in August 2009. The software giant issued a "Public Undertaking" which documented the changes Microsoft agreed to make to Office 2010. "Beginning with the release of Office 14 (Office 2010), end users that purchase Microsoft’s Primary PC Productivity Applications in the EEA in both the OEM and retail channel will be prompted in an unbiased way to select default file format (from options that include ODF) for those applications upon the first boot of any one of them," read part of the statement in August 2009. The beta versions of Office 2010 did not include the ballot screen but recent Release Candidate builds have introduced the prompt.

Neowin questioned Microsoft over the recent introduction of the prompt and a Microsoft spokesperson confirmed: "With Office 2010 we are continuing to deliver on our commitments to interoperability and customer choice and make it easy for customers to set their default file format in Microsoft Word, Excel and PowerPoint with this prompt box.” The spokesperson also added that Microsoft customers "have complex needs that no single vendor can address" and that the software firm needed to collaborate with the rest of the industry to make their products as interoperable as possible.

Microsoft's implementation of OpenDocument (ODF) support and the adoption of OOXML as the default document format in Office 2007 was heavily criticised in the past by free software campaigners and open source advocats. In 2009, Richard Stallman of the Free Software Foundation stated that "Microsoft offers a gratis patent license for OOXML on terms which do not allow free implementations." Stallman was concerned that users would "receive Word files in a format that free programs are not even allowed to read." Neowin asked Stallman about the recent introduction of the prompt. "It is clear that Microsoft is trying to make ODF sound like a bad choice, so that few users will really use ODF. I conclude that Microsoft wants to be able to say it offers ODF support, while having few users for it," he said in a statement via email.

In May 2009, the ODF alliance announced that Microsoft's support for OpenDocument (ODF) needed substantial improvements for real-world interoperability. "Unfortunately, serious shortcomings have been identified in Microsoft’s support for ODF. Putting potentially millions of ODF files into circulation that are non-interoperable and incompatible with the ODF support provided by other vendors is a recipe for fragmentation," said ODF alliance spokespeople.

In an email to Neowin, Marino Marcich, executive director of the ODF Alliance said he believed the ballot screen falls short in several areas. Comparing it to the browser ballot screen for Windows 7, Marcich said: "Microsoft offered the EU a ballot screen that gave the browser choices in randomized order, with an unbiased message, including a link for further information provided by the vendor.  But the file format ballot screen gives OOXML the first position.  It gives a biased description of ODF, listing the liabilities of Microsoft's ODF implementation while failing to state any of ODF's advantages."

With the initial negative reactions to Microsoft's Office ballot screen, the software company could face the same issues it had when it first created a ballot screen for browser choice in Windows 7. Microsoft agreed to randomize the ballot screen selection after several rivals complained to the EU. In December 2009, the European Commission said it had accepted Microsoft's commitments to give users browser choice.