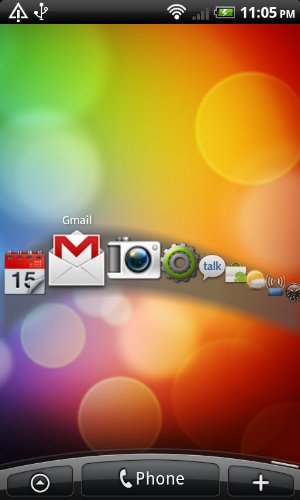 It's another day and there's another Free premium App from Amazon's Android App Store. Today, that app is Wave Launcher, by MobileMerit.

Wave launcher is a simple concept. Rather than having to go all the way back to your home screen and/or app drawer to launch an app, Wave Launcher lets you launch apps from wherever you are, just by swiping the screen.

With its default settings, you activate Wave Launcher by swping from the bottom of the screen upwards. This makes the rather nice looking "Wave" appear (Which has clearly taken a leaf from WebOS) and then it's just a case of continuing the swipe motion left or right to highlight the app you want. The app then launches as soon as you lift your finger. Pretty simple and pretty effective.

When I first read the description for the app, I thought it was attempting to fix a problem that didn't really need fixing. I mean, how much time are you really going to save? Still, after using Wave Launcher for a few hours, I can definitely see the point in it. You might only be saving a second or two every time you use it, but if you're like me and use your phone regularly throughout the day, that time saving quickly adds up.

Wave Launcher does come with a slight problem though. With the default settings, you swipe from the bottom of the screen upwards, but I regularly found myself doing this while using other apps. The Official Facebook app, for example, has a notification area at the bottom of the screen that you swipe upwards to see - and you can probably see where this is going, it took more than a couple of attempts to open the notification area. This was particularly noticeable with the Android Notification pane. Swiping down wasn't a problem, but swiping up to close it took a bit more precision than I was used to, the Wave Launcher activation area overlapped most of the notification pane's lower handle. A bigger problem came about when I attempted to type a few messages out, the on-screen keyboard is also located at the bottom of the screen and I kept activating Wave Launcher rather than inserting spaces. Luckily, Wave Launcher lets you configure it to a respectable degree. 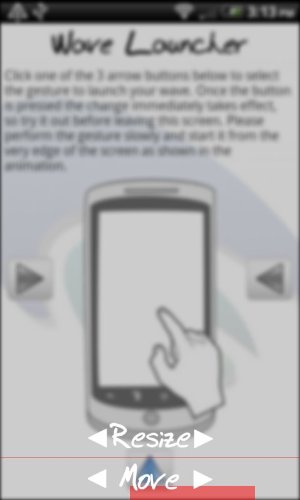 You can adjust the width and position of the activation area, but annoyingly you can't adjust the height. I got the feeling that most of the issues I had could have been resolved by just making it a little bit smaller, height-wise. Still, I came up with a solution. Despite the instructions indicating that swiping from the bottom upwards was the most intuitive, I resized the area to about the width of my thumb, then moved it to the top left corner. This meant that the gesture changed from a bottom-up motion to a left-right motion, but since doing this, I have had zero issues with accidentally launching it.

Update: As it turns out, you can adjust the thickness of the activation area, the setting is just in a different area. Thanks to Shadow D. Wolf for pointing this out!

The customisations don't stop there. Wave Launcher fully supports ADW Theme packs for the icons, which are readily available in the market. For the die-hard themers, this could make all the difference with Wave Launcher versus other similar Apps, such as the very nice Quickdesk.

For such a simple App, Wave Launcher is very polished and very customisable. At a regular price of $0.99, it's a worthy addition to anyone's collection, but the fact that it's free for today makes it a no-brainer - grab it while you can!