As touchscreen devices are grounding themselves in the industry as the next big thing, differences between the screens themselves are increasingly becoming an important factor when deciding between the multitude of devices. Factors such as display resolution, brightness, contrast ratio, viewing angle, and color accuracy are often the usual categories tested for comparison, but Moto Labs is going one step further to evaluate an often overlooked but crucial component of touchscreens: accuracy.

Moto Labs made its first splash on touchscreen accuracy analysis with their initial DIY test this past January, where they simply used a human finger to draw diagonal lines across the displays of an Apple iPhone, HTC Droid Eris, Motorola Droid, and a Google Nexus One. That early comparison brought some heat though, as critics argued that inconsistencies in "finger pressure, line-straigtness, or tracing speed" could bring inaccurate results.

Accepting the arguments as fair points, Moto Labs chose to test it once again but this time with an actual robot scripted to draw slow, diagonal lines at controlled pressures and sizes. They also decided to throw in a Palm Pre and Blackberry Storm 2 after much demand from their initial comparison. How did they fare? The following graphic says it all: 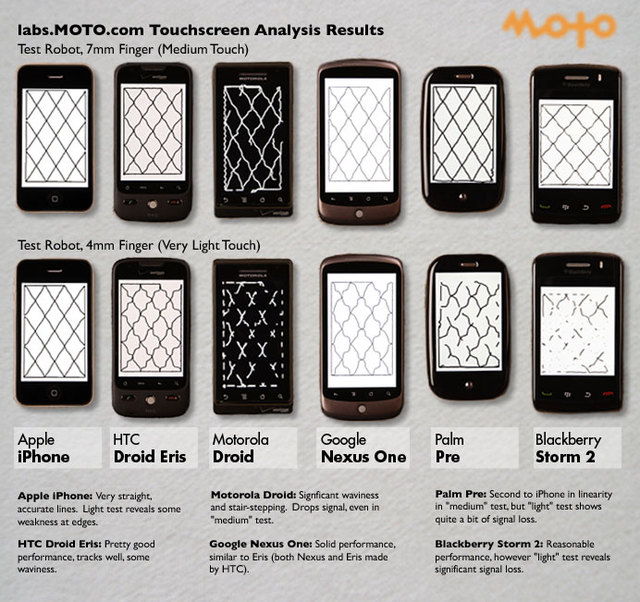 Apple's iPhone bested every other phone in all areas except some weakness near the edges while the HTC phones (Nexus One and Droid Eris) came in second due to some waviness in its input. After that, it gets pretty ugly: the Motorola Droid exhibited significant waviness and dropped signals, regardless of the size of finger and strength of touch. While the two new additions (Palm Pre and Blackberry Storm 2) fared well in the medium touch test, they faltered in the light touch test — exhibiting significant signal loss and waviness.

Moto Labs also posted comparisons of their previous human finger touch analysis against the new robot analysis. The comparison largely conveyed the same result, though the non-Apple phones do seem to fare worse in the robot test. Moto Labs attributed this to the lower drawing speed in the robot test:

“And as we we’ve explained previously, low speed is crucial to testing the true performance of the screen, because tracing high speeds skips over the many data points captured at slow speed, causing lines to look straighter than they actually are. Because the robotic finger is somewhat less compliant than a human finger, it is a little harder to detect. This confuses poor screens even more than when humans attempt the test.” 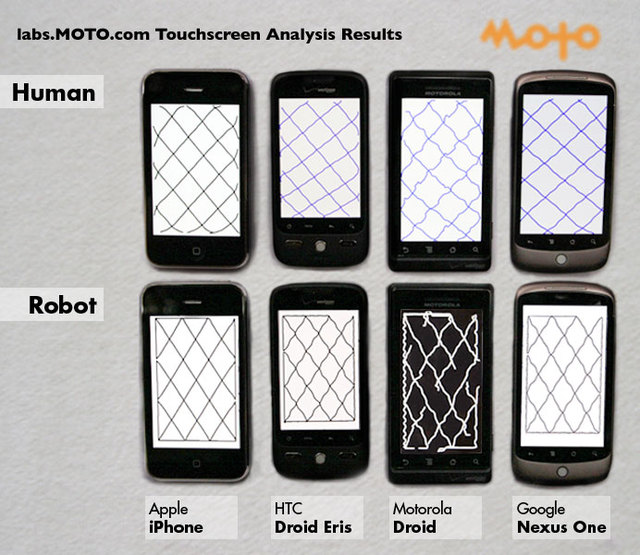 Questions arose of whether the specific drawing app on the different platforms could be attributed to the differences between the phones. Moto Labs stated that while some drawing apps do implement various smoothing algorithms, they had no effect on their results because they chose apps that did not exhibit any or much at all smoothing. Also asserted was that smoothing algorithms would not affect the input data due to the slow drawing speed of the robot (¼ inch per second). The specific apps used are listed on the website if you want to try it for yourself.

Hope is not lost though, as Moto Labs concludes that they do expect these problems to be remedied in the future as touchscreens mature and gain further traction in the industry. Commitment and competition will ultimately deliver seamless touch experiences for all consumers over time, since phone makers are continuously perfecting their products. They offer these three points of advice for companies wanting to invest into touchscreen products: