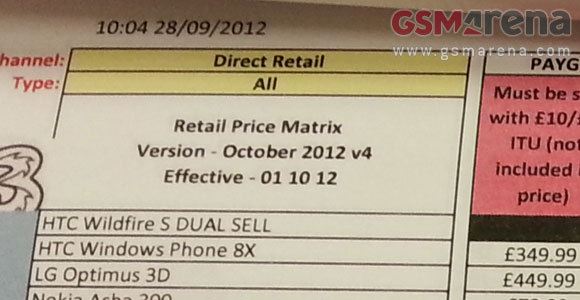 Converting to US dollars gives you an outright price of $564 for HTC's flagship launch Windows Phone 8 smartphone, which is cheaper than both the Lumia 920 and Lumia 820 in Europe. Nokia's devices are said to be priced at €599 (US$771) and €499 (US$643) respectively, which at this stage makes HTC's offering considerably cheaper than the comparable Lumia 820.

Of course the HTC 8X will also be available on a number of plans at Three UK, which you can see in the full price list. Keep in mind that these are not confirmed prices, and could change before the prices are officially announced closer to the Windows Phone 8 launch on October 29th.