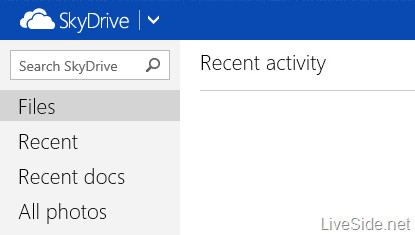 Microsoft has been adding new features to SkyDrive on a regular basis. Now there's a rumor that claims Microsoft will be implementing a way for its users to see which of their recent files have been uploaded to the SkyDrive.com website.

Windows 8 users have had the ability to see which recent files have been uploaded to SkyDrive via the Live Tile on the Windows 8 app since January 2013. If this latest rumor is true, this would expand this feature to all SkyDrive account users.

The recent activity feed addition is likely to be one of several updates Microsoft has in mind for SkyDrive in the coming weeks and months. Another rumor from LiveSide.net earlier this year claimed that Microsoft will also add Photosynth image support to SkyDrive.