So far Verizon has officially launched two Windows Phone 8 devices: the Nokia Lumia 820 and Windows Phone 8X by HTC, both of which will be available very shortly. But if you've been following since the Windows Phone 8 launch on October 29, you'll know that there's another WP8 device coming to Verizon before the end of the year known as the Samsung ATIV Odyssey. 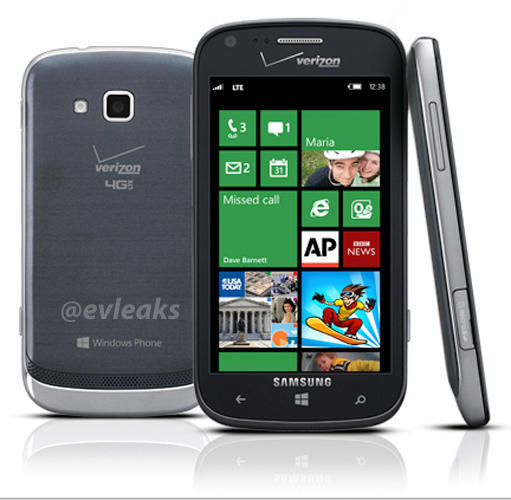 Thanks to @evleaks on Twitter - best known for accurately leaking press shots of the Lumia 820 and 920 before they were announced - we're seeing a proper, leaked shot of the ATIV Odyssey for the first time. It has a similar design to the Samsung Focus and Focus 2, however the back looks like the flagship ATIV S that has already been announced.

From the shots you can see the 4G LTE logo on the back, as well as a slot for a microSD card on the left hand side; plus of course, Windows Phone 8 is seen running on the display. We've actually heard rumors about the Odyssey since July where the device was revealed in court documents: they listed a 4.65" Super AMOLED display, an 8 MP rear plus a 2 MP front-facing camera, Qualcomm's MSM8960 chip used in many other Windows Phones, and NFC.

While this image above doesn't really show the size of the device compared to anything else, the above specs including the 4.65" display seem plausible. The design leaves a lot to be desired, however it doesn't appear to be a particularly low-end device though not as high up on the chain as the ATIV S. This is speculation of course, as we'll have to wait for Samsung and Verizon to make an official announcement sometime in the future.