Samsung’s upcoming flagship, dubbed to be called the Galaxy S20 is no secret. Much information on the device has already leaked, including even some of the wallpapers that will come with the purported trio. In addition to the already leaked specifications, more information about the device including a brief hands-on video has leaked today.

As rumored previously, the S20 line will indeed be offering a 120Hz refresh rate option. However, per the source, the high refresh rate can only be paired with the 1080p (Full HD+) screen resolution. However, when the WQHD+ 3200x1440 resolution is selected, the device will default to 60Hz. This is possibly done to preserve battery life since a higher refresh rate means an increased battery drain. For the time being, though, a variable refresh rate option that shifts on the fly does not seem to be present. As for the aspect ratio, the phone is said to sport a taller 20:9 ratio.

The leak also provides light on the fingerprint sensor present on the device. Samsung seems to have gone for an under-display fingerprint sensor of the ultrasonic type like on the Galaxy S10 and Note10 line. However, it is not clear if the company will employ the newer Qualcomm 3D Sonic Max sensor that was unveiled during the Snapdragon Technology Summit in December of last year. Additionally, in terms of the design, the source could confirm the absence of a 3.5mm headphone jack. Following suit with the Note10 series, this will be the first of the S series line of flagship devices to omit that feature.

If a side by side photo of the Galaxy S20+ with a Galaxy S10+ is to be believed, the S20+ will be a much taller device. The S20, S20+, and S20 Ultra are expected to sport a 6.2-inch, 6.7-inch and 6.9-inch display respectively. The leaks also suggest that the S20+ will come with 12GB of LPDDR5 RAM, while its larger sibling can house up to 16GB RAM. The S20+ is expected to come with a 4500mAh battery, topped up with a 25W fast charging brick. Earlier reports also hint that the larger S20 Ultra could come with a 5000mAh battery and 45W super-fast charging capabilities. 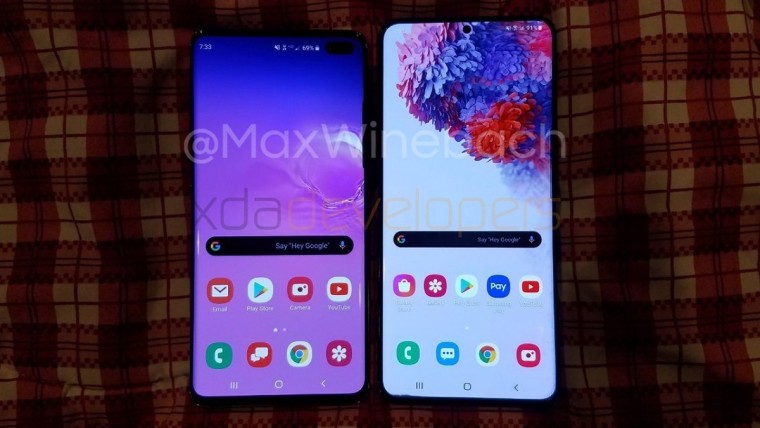 Samsung will unveil the S20 line of flagships in less than a month at its Galaxy Unpacked event on February 11. With so much information already leaked and rumored, it will be interesting to see what other capabilities of the devices does the company shows off and what prices are the phones going to be offered at.