While Samsung has had huge sales successes with its smartphones like the Galaxy S and Galaxy Note series, the many versions of its Galaxy Tab tablets have been met with indifference from consumers. Today, Samsung announced the newest version of the Galaxy Tab family, but its hardware is not exactly on the high end of the spectrum. 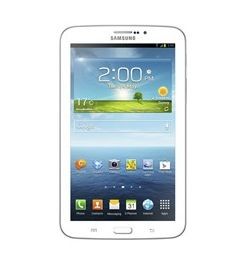 Samsung's announcement of the Galaxy Tab 3 shows that it will be a 7-inch tablet based on Android 4.1. However, the processor is just a dual core running at 1.2 GHz, well below the processor the Samsung Galaxy S4 has in both its U.S. and international versions. The screen's resolution is just 1024x600, with a three megapixel rear camera and 1 GB of RAM.

There will be versions sold with 8 GB and 16 GB of on-board storage, along with versions that will have WiFi only along with a WFi/3G wireless option. Add it all up and it looks like the Samsung Galaxy Tab 3 will be priced on the low end of the tablet market. Samsung has yet to announce a price tag for the tablet, but the WiFi version is due in May with a WiFi/3G version coming in June.