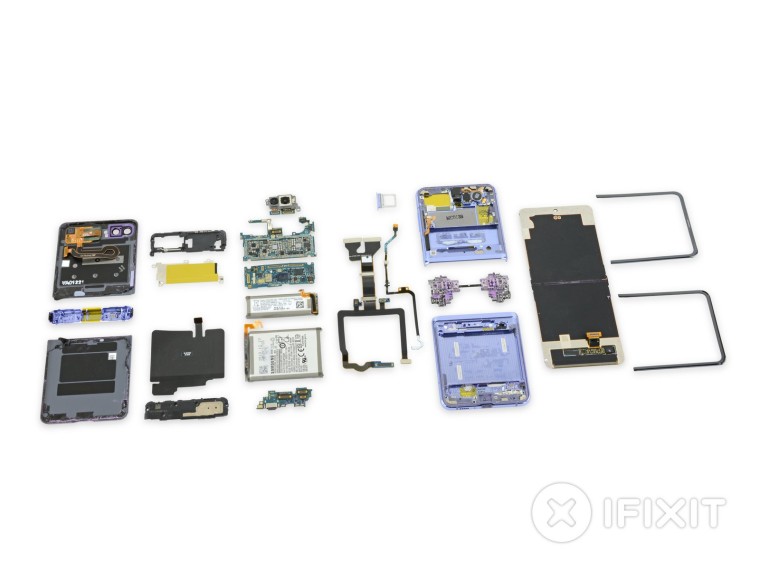 A week after conducting their most complex teardown, the one of the Motorola Razr, the iFixit team has posted their teardown of the Samsung Galaxy Z Flip. The teardown not only reveals all the innards of the device but also tests some of Samsung's marketing claims.

The Galaxy Z Flip uses a new hideaway hinge that features Samsung's "sweeper technology" which uses "nylon fibers crafted by micro-height-cutting technology to repel dirt and dust." iFixit put this claim to test by putting the Z Flip in a bag full of purple dust. A few seconds of heavy dust exposure later, opening the device led to horrible popping noises and a frozen hinge. Tearing down the device, the team found that the purple dust had made its way to the inside of the Z Flip as well. As iFixit puts it, the "sweeper technology" brushes performed "hilariously poorly" in repelling dust.

The Galaxy Z Flip was not as complex to teardown as the Motorola Razr. It even managed to score 2 in iFixit's repairability score, with the team noting that a single Philips screwdriver is enough to take care of all the screws. The modular nature of the many system components is also helpful. However, carrying an in-house repair on the Galaxy Z Flip is an extremely difficult task due to the glued-down glass panels which pose a major barrier for entry inside the device.