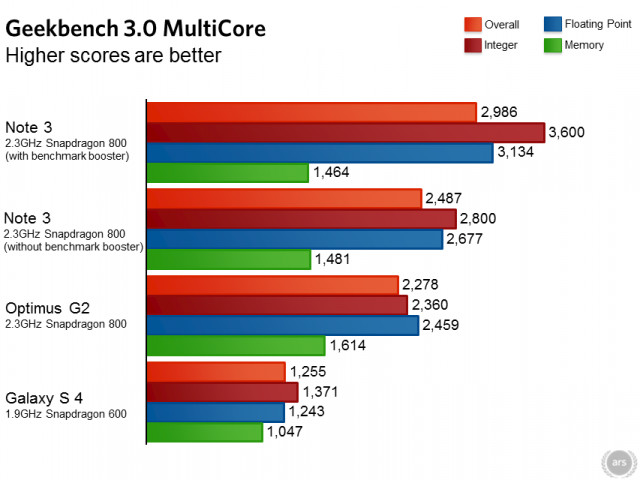 Well, well, well. Samsung thought it'd get away with a little bit of cheating, but it didn't take long to figure out that Samsung tried and failed to pull the wool right over our eyes. It turns out that the new Galaxy Note 3 is designed specifically with benchmarks in mind so that scores are inflated to make the device look faster than it actually is.

Discovered by Ars Technica, the Galaxy Note 3 kicks into high-gear whenever a benchmark app is launched and in fact will not let the CPU idle whatsoever. This high performance mode allows the phablet to run up to 20 percent faster, but just while the benchmark app is running. Once the test is complete and the app is closed, Samsung's device will return to its regular state and return to normal speeds. The clear benefit to doing this is to make the Galaxy Note 3 look faster than what it is to reviewers, technology enthusiasts and, indirectly, customers.

The Note 3 has a 2.3GHz Snapdragon 800 processor and so does the LG Optimus G2. Ars Technica knew something was up when Samsung's handset was scoring far better than LG's, yet the two feature the exact same processor. Monitoring CPU usage led to the realization that the Note 3 got an unfair boost in apps like Geekbench. In fact, using a renamed version called Stealthbench deactivated the power boost.