Samsung began rolling out the first Android 11-based One UI 3 beta builds to the Galaxy Note10 series last week and was expected to further expand the rollout to more devices such as the S10 series phones and the foldable line up of devices. However, it looks like the South Korean firm is suspending the rollout of the beta builds for the time being reportedly due to the discovery of bugs causing heavy battery drain. 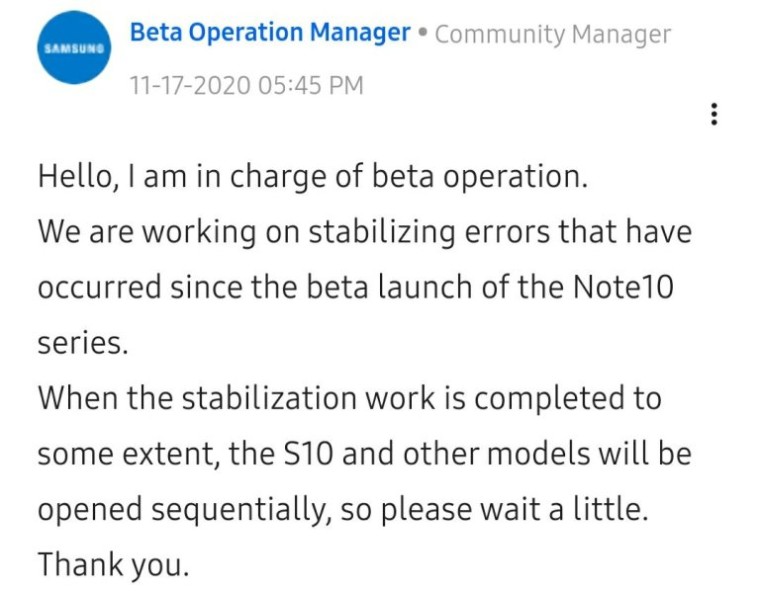 A comment by a beta operation manager posted in the Community app (spotted by TizenHelp) suggests that a “stabilizing error’ has been causing issues on the beta builds of the Note10 series phones and that the rollout for other older flagship devices will resume when the problem is fixed “to some extent”. The publication also adds that users in the Community forums are complaining of constant app crashes and unusual battery drain since installing the beta version.

It is not clear if these issues will end up affecting the overall release schedule for the One UI 3 rollout on newer devices. Considering that the problem has only been reported on older flagships, it is possible that the S20 series might well be exempt from delays if any. Regardless, when the firm does resume releasing beta builds, the Galaxy Z Flip, Z Fold, and S10 series phones are expected to be in line to start receiving the OS update.

If you own an S10 series phone or any of the company’s foldable phones and have signed up for One UI 3 beta, the wait to receive the new OS update could be slightly longer than expected.