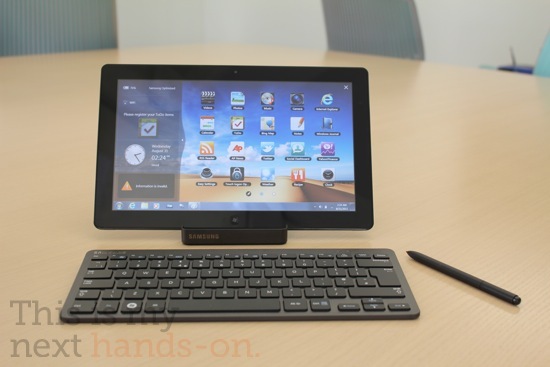 We have seen a lot of tablet devices that use the Android operating system, whilst Apple's popular iPad uses its own iOS operating system. On Wednesday Samsung announced its new tablet PC, the Series 7 Slate. It's one of the few such products that's running Microsoft's Windows 7 operating system. Once more, according to a story on Thisismynext.com, Samsung says it has "every intention on making the Series 7 Slate upgradeable to Windows 8." The company didn't go into any details on how this upgrade will work but did say it will partner with Microsoft for this effort. That makes the Series 7 Slate PC the first such Windows 7 product that will have at least some kind of Windows 8 upgrade program.

As far as the physical dimensions for the Series 7 Slate, it's a fairly large product compared to other tablets. It has an 11.6 inch screen, weighs just over 2 pounds and has Intel's Core i5 2467M processor running at 1.6 Ghz  with 4 GB of RAM. It also has front and rear cameras, WiFi and 3G wireless features, a USB port, a micro HDMI port and more. However the pricing of the Series 7 Slate is definitely closer to a PC than a tablet. Samsung said that the cheapest version will be priced at $1,099. That's due to the fact that it uses a 64 GB solid state hard drive for storage. Look for the Samsung Series 7 slate to be released in late September.