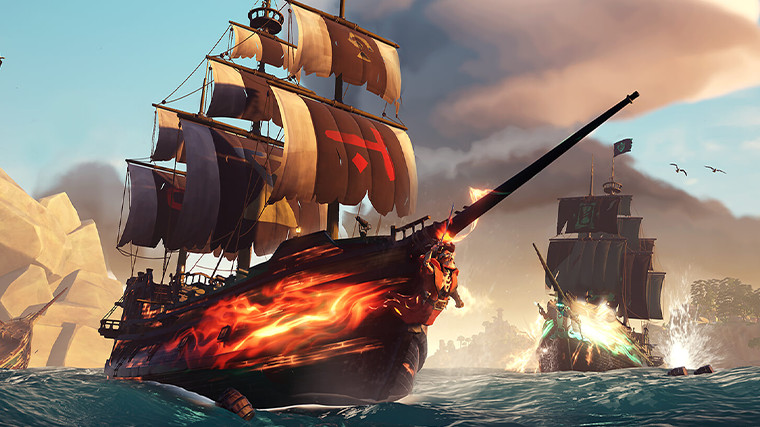 A deep dive into how the new PVP encounters work can be read here, but to summerize, pirate crews are now able to matchmake while in Adventure mode to find an opposing vessel of same skill level, letting them burst out of the sea with style to begin a 1 vs 1 battle.

Players can fight to earn allegience with one of the two new factions, Guardians of Fortune and Servants of the Flame. Rising to the top of a faction unlocks access to new areas where unique "curses" can be equipped to make pirates look like an apparition or skeleton.

New commendations to chase, achievements to earn, and a 100-level free battle pass are here for players to climb as well. A separate premium battle pass, and an Emporium refresh, is also available for purchase with access to exclusive cosmetics for both vessels and pirates.

Being such a combat-focused update, aside from the new features, Rare has also made changes to balance. Players will find that Cursed Cannonballs are now more scarcer around the world. Plus, their effectiveness against pirates and the amount that can be held by one player have been nerfed as well. Complete patch notes for the update can be found here.

The Sea of Thieves Season 8 update is now alive across PC, Xbox One, and Xbox Series X|S, weighing in at around 8GB depending on the system in use.