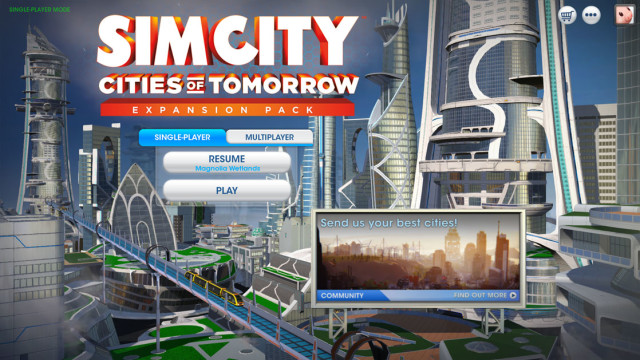 It's been over a year since developer Maxis and publisher Electronic Arts launched their revival of the SimCity franchise as an online-only multiplayer game. Today, Maxis and EA finally released "Update 10" for the game that adds a way to play SimCity in a classic offline single player mode.

While Maxis at first tried to defend their vision of an online SimCity after the game's release, many fans of the original series still wanted to play the game the old-fashioned way by themselves without an online requirement. EA announced their plans to offer such a mode in January.

In a blog post, SimCity's single player producer Meghan McDowell said that the team's goal was to make it as expansive as the current multiplayer mode. She also points out that mod creators will be able to alter the game via single player mode without the potential of those mods harming the multiplayer portion.

In a separate post, SimCity's lead single player engineer Simon Fox gives some more details on how they were able to put the mode in a game designed at first for online multiplayer. He states:

SimCity was written to rely on the servers. The game routinely pings the servers for critical pieces of data (region status, workers, trading etc.) and it relies on that information to keep the simulation moving. This meant rewriting the entire system, which previously existed in Java, and putting it into C++. We’ve had to knock out the internet pipe stuff. There’s lots of code that hits the servers looking for information. We’ve had to write a lot of code to produce that data locally, specifically for region information.

SimCity still needs an online connection to EA's Origin service to launch but once that's done players can switch to the game's single player mode and continue to play while offline.