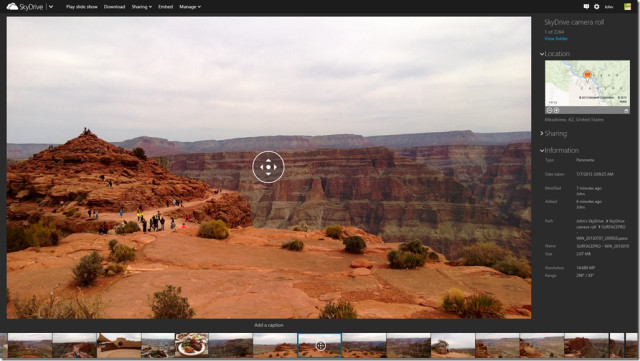 A couple of months ago, it was rumored that Microsoft was going to add uploading and viewing panorama photos on the company's SkyDrive cloud storage service. Now it appears that Microsoft has quietly launched this feature but the uploading appears to be limited to those folks who have installed the Windows 8.1 public preview.

While Microsoft has yet to officially announce this new SkyDrive panorama image support, Liveside.net says it is indeed working right now. Basically, if you have downloaded and installed the Windows 8.1 preview, and if your laptop or tablet has a camera, you can open the Camera app and then select the Panorama mode to take a 360 degree picture with that camera. After that, the app should save that image to the Camera Roll folder.

The app can then either manually or automatically save that panoramic picture to your SkyDrive account, and then, as the above screenshot indicates, the panorama photo should then be viable in your SkyDrive camera roll folder.

Again, it would appear that only Windows 8.1 preview users can actually take panoramic pictures that can then be uploaded to SkyDrive. We have emailed Microsoft to get more information about this feature and if it will be expanded to Windows 8 and Windows Phone 8 users.