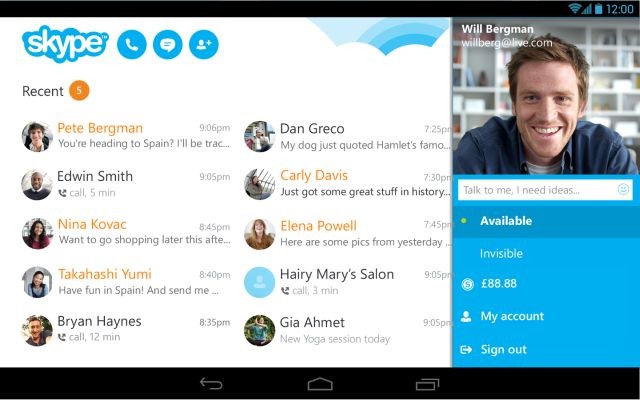 While Windows 8 and 8.1 allow for more than one Metro app to run on screen at the same time via Snap mode, the same thing cannot be done with many Android devices. Today, Skype put in a Snap-like mode for its Android app, which will allow tablets that run on Google's OS to take a video or audio call but still run other apps on the side.

While this new feature is meant to be just for Android tablets, the official Skype blog says that smartphones that download the new 4.5 version of the app will still see a message asking for permission to draw on top of other apps when a call comes in. The blog says, "We apologize for the inconvenience," which would indicate that this might be modified in future versions.

Additionally, the new Skype Android version allows tablet users to jump quickly from one letter in a contact list to another. The blog states, "Just pinch your contact list to zoom out to an alphabet and tap on the letter (or number / symbol option) to jump to that section. It’s a whole lot faster than scrolling." Again, this feature is just for Android tablets.

The change log says that the new version improves Video Instant Messaging functionality and has fixes for the newest Samsung phones. It adds compatibility for the Hudl tablet, fixes crashes when the Skype app is used on the Google Nexus 5, and the drop-down filter selections on the people tab are now supposed to be persistent.