Earnings season is still ongoing with many companies posting their financial results for the quarter ending on December 31, 2020. Today, Sony posted its own results, with a total of ¥6.78 trillion ($64.53 billion) in sales and an operating profit of ¥905.4 billion ($8.62 billion) for the first three quarters of its fiscal year.

Unsurprisingly, the company's biggest driving factor this quarter was its Games & Network Services division, which includes the PlayStation brand. The company launched the PlayStation 5 last November, and that's evident looking at the ¥1.996 trillion (roughly $20 billion) in sales, an increase of ¥452 billion ($4.3 billion) from the same period in 2019. Profits also increased from ¥192.2 billion ($1.83 billion) to ¥309.2 billion ($2.94 billion). 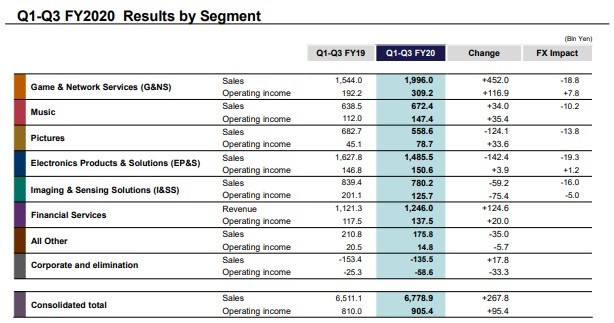 If you're wondering exactly how many PlayStation 5 units Sony actually sold, it looks like a total of 4.5 million units were moved in this period. The PlayStation 5 was launched on November 12 in some markets, followed by a wider release on November 19, so those results only include about a month and a half of being on sale, making the number all the more impressive. Sony has been contending with stock shortages, but it still claimed the biggest console launch in PlayStation history.

Sony points out that the PlayStation 5 is being sold at a loss due to its strategic pricing, so the hardware itself isn't bringing in any profit. However, the hardware sales come with increased software sales and subscriptions. Sony sold 103.7 million PlayStation games this quarter up from 83.3 million in the same period of 2019. Of those sales, 18.4 million were for first-party titles, which is also higher than the 16.3 million units sold the year before. On top of that, the number of PlayStation Plus subscribers hit 47.4 million, up from 45.9 million the previous quarter, and an even bigger increase from the 38.8 million subscribers it had a year earlier.

Of course, the PlayStation hasn't died completely, but it did drop massively from the previous year. The last-generation console sold just 1.4 million units, down from 6.0 million in the 2019 holiday quarter. It's only natural that this number will keep going down with Sony having discontinued production of most PlayStation 4 models.