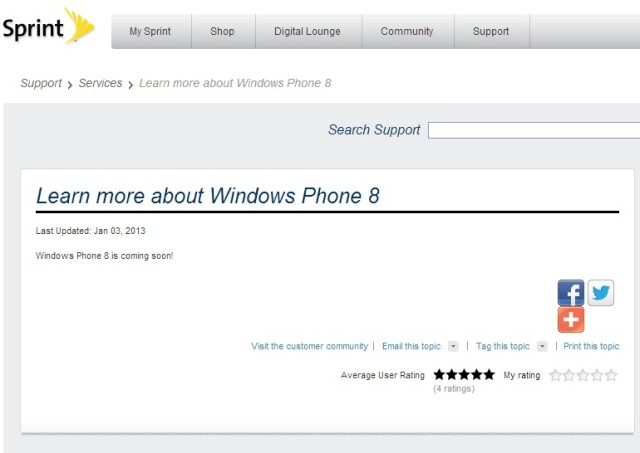 Over on Sprint's support page, a new section has appeared for Windows Phone 8, teasing some sort of announcement by saying that "Windows Phone 8 is coming soon!" Currently, Sprint is the only major wireless carrier in the United States who don't offer a Windows Phone 8 device, but it appears as though that's about to change.

We first heard Sprint would be delivering a Windows Phone 8 device in 2013 through an official statement made to PCMag. Back in November it only said that a device would be coming "next year" to its 4G LTE network, but beyond that there was no other information into what sort of device it would be or specifically when it was going to arrive. The recent support page listing could indicate a launch very soon, perhaps with a device we already know about.

Since Windows Phone was first launched, Sprint has only offered one device using Microsoft's successor to Windows Mobile – the HTC Arrive running Windows Phone 7 – but that device was hardly a sales success. Perhaps the introduction of a newer, flagship Windows Phone 8 device would boost Sprint's confidence in the platform.