With Windows Phone 8.1 now formally announced, we’re learning more about the update and the improvements that Microsoft has packed into it. One little nugget of information that has emerged today will no doubt please many Windows Phone owners across the globe. 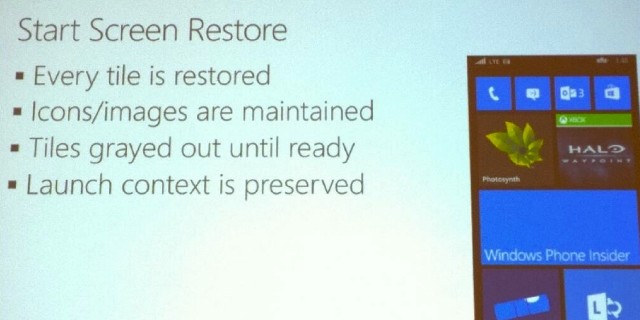 In a session at its BUILD conference today, Microsoft confirmed that one new feature in Windows Phone 8.1 will be the ability to backup and restore your Start screen. This feature is of course available in Windows 8.1, but has remained frustratingly absent from Windows Phone, until now.

If you’ve ever had to restore your Windows Phone, or simply set up a new one when upgrading, for example, you’ll know the pain of having to manually reinstate, resize and reposition all of your tiles on the Start screen, even when restoring from a saved backup. That will soon be a thing of the past.

In the slide shown, Microsoft makes it clear that “every tile is restored”, and that even the images on those tiles are preserved. Tiles will appear greyed out on a restored Start screen until they are reinstalled and ready to launch.

Microsoft is continuing to make last-minute refinements and fixes to Windows Phone 8.1, although its full feature list has now been finalised. The final build is expected to be made available to manufacturers and other Windows Phone partners on April 14; users on the Developer Preview program should also be able to download the update on, or shortly after, that date.