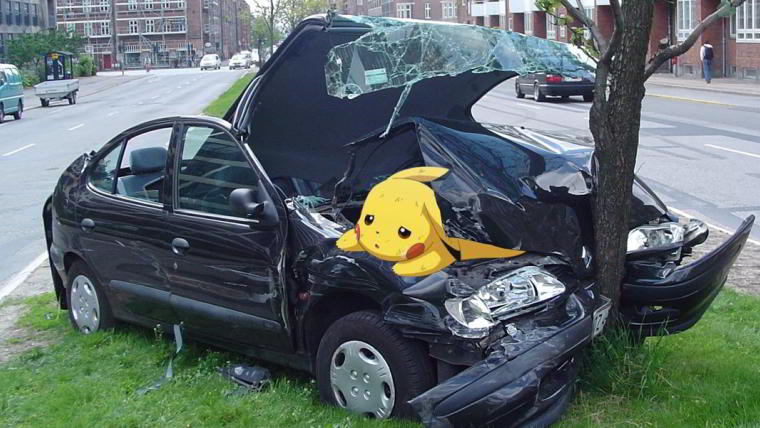 Pokemon GO was all the rage when it was released around the world last summer. However, players' attempts to "catch 'em all" prompted some very poor choices, including playing while driving, which resulted in several deaths and property damage. A new study from the University of Purdue suggests that damages to life and property could have exceeded billions of dollars, based on a look at just one Indiana county within the first 148 days of the game's launch.

The study, entitled "Death by Pokemon GO," looks at Tippecanoe County in Indiana. "We document a disproportionate increase in vehicular crashes and associated vehicular damage, personal injuries, and fatalities in the vicinity of locations, called PokéStops, where users can play the game while driving," Purdue economists Mara Faccio and John McConnell said in the study. The report also contrasted data against Gyms, where users could not drive, and used that data as a "placebo." In practical terms, accident data near PokeStops was used as people could pick up supplies in a drive-by, while accident data near gyms was given much less effect because driving while battling was severely less likely.

The results showed that there were two deaths associated with the game, and numerous accidents involving vehicle and property damage. "We estimate the total incremental county-wide cost of users playing Pokémon GO while driving, including the value of the two incremental human lives lost, to be in the range of $5.2 million to $25.5 million over only the 148 days following the introduction of the game."

What's more, if expanded across the entire United States, the data extrapolates to an incredible $2 billion to $7.3 billion in value. Keep in mind that is just within the first five months of the game's release.The game lost more than 15 million users in the first month, and my October, developer Niantic was already trying to implement changes that would not allow players to use the game while driving. But the damage was already done, apparently, and likely has continued in the year since the target date of the study concluded. The numbers could conceivably have doubled, let alone worldwide numbers.

With developer Niantic working on a new AR game in the Harry Potter universe that could be even more popular, it looks like the company will need to work extra hard to try to ensure people don't act stupid while playing by putting themselves and others in danger.

Source: The Verge | Image: Next Reality