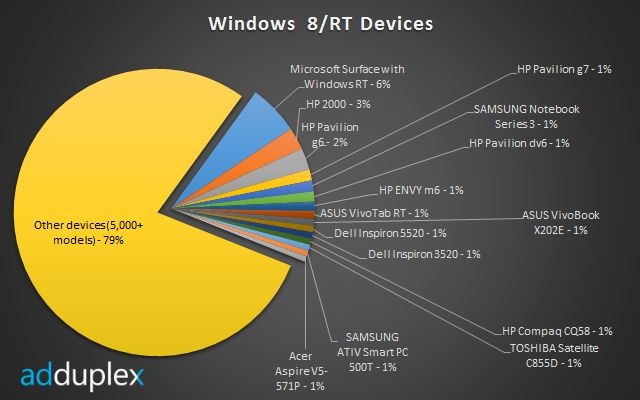 A few weeks after the official launch of Windows 8 and Microsoft's Windows RT-based Surface tablet, an online ad network company called AdDuplex posted numbers gathered from their network that showed the Surface tablet was leading the Windows 8/RT hardware market. In mid-November, their data showed that 11 percent of apps that accessed the AdDuplex network were running on the Surface.

On Tuesday, AdDuplex updated their Windows 8/RT stats for the week of December 7th. Their new numbers show Surface still leading among PCs using Microsoft's latest OS, but that its percentage had dropped down drastically to six percent. Three cheap HP PCs (the HP 2000, the HP Pavilion g5 and the HP Pavilion g7) were next on the list and the Asus VivoTab RT, which like the Surface runs on Windows RT, is eighth on the list.

It's not surprising that the Surface has lost some of its market share; more PC OEMs are releasing new Windows 8 hardware to stores. Indeed, AdDuplex said that its ad network is now tracking over 5,500 different Window 8/RT devices, a massive increase compared to just over 3,000 PCs a few weeks ago. These new numbers might also indicate many people have upgraded their older PCs to Windows 8.

HP has the biggest overall market share of Windows 8 devices at 22 percent, followed by Dell at 10 percent, Asus and Acer, each with nine percent, and Toshiba at seven percent. Microsoft has dropped from number two to number six on the list at six percent.