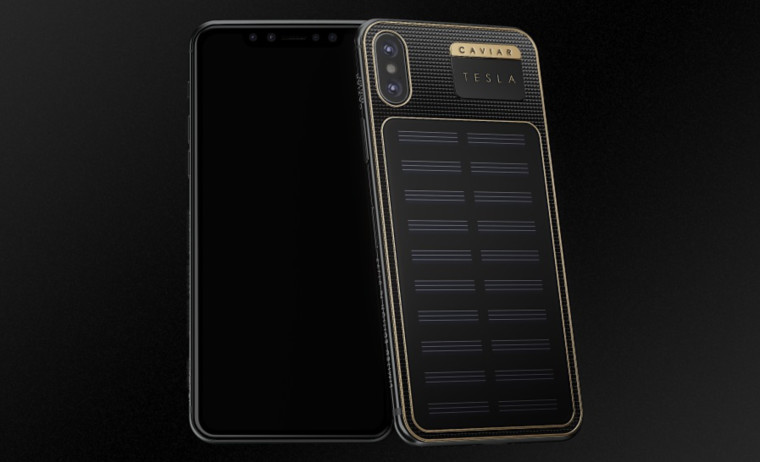 Caviar, a Russian company which specializes in gilding and fitting jewels to electronic devices, has put its iPhone X Tesla on sale. This product has been made somewhat in honor of Nikola Tesla, Steve Jobs, and Elon Musk. News of this phone first came out in November of 2017.

The iPhone X Tesla is essentially an ornate gilded body for the regular phone, with the added ability to charge the phone with a solar panel and additional battery.

Caviar has released a number of head turning products over the years. Last year they released a $2500 Nokia 3310 variant, which included none other than a golden engraving of Donald Trump and Vladimir Putin on the back. This was made in honour of the G20 summit where the presidents met officially. Some of Caviar's other work can be seen in the Russian advert below.

The 64 GB version of the iPhone X Tesla is going for a measly $4,500, while the 256 GB model will set you back for $4,800. Despite these lofty prices the phone apparently had over 100 pre-orders, according to the company. This lead Caviar to extend the maximum number they will release of the product to 999 units. The first unit is reportedly for Elon Musk himself, who was the inspiration behind the name of the product, or as Caviar explains:

"The development in the sphere of creating solar batteries, smart homes, equipped with such batteries and vehicles working on the electricity, is actively carried out by Elon Musk today – the main mastermind of the Tesla Company; in honor of his great innovative developments, the new Caviar phone was named."

Reportedly Musk's one will also bear the following engraving, "Made on Earth by Humans"". Even though Caviar's products are centered on aesthetics, the Tesla body increases the size of the phone quite substantially, as Apple Insider reports:

"The increased thickness from the original's 7.7mm to 16.2mm is large enough that the rear camera bump is now a recess."

Whether or not Musk will actually have and use this new contraption, or whether ordinary people will come across it at all, remains to be seen. The company has not specified the specs of the solar panel system and how much more battery life one might gain. In terms of other specs, it is basically still just an iPhone X.

Sources: Apple Insider, Caviar, and The Verge | Images via Caviar