The Daily, News Corp's answer to the growing number of news-reading tablet users, was unveiled today in New York. Costing a mere 14 cents a day, subscriptions can be purchased at 99 cents for a week or $39.99 for a year, with Verizon offering the first two weeks free. The Daily will be released on the App Store at 12PM EST today, and News Corp are hoping that the publication will tap into the expected market of 15 million tablet-owning Americans.

News Corp are aiming for 100 pages per day, with 360-degree panoramic photos and HD video included as highlights. Touted as "the first all-media product", News Corp has employed the use of personnel from various forms of media, including television, magazines and newspapers, in order to create an all-encompassing publication that will take advantage of the capabilities of the iPad.

To navigate content, a Coverflow-style interface is available, or users can push a shuffle-like button to bring up articles they haven't read yet. Audio readouts are also included for the visually impaired.

The Daily takes advantage of the internet through Facebook, Twitter and email integration for sharing favourite articles. Users can share audio comments as well as the traditional text-only comments. There's also a built-in web browser and App Store integration linked to reviews featured in The Daily.

The subscription system is described as "one-click", hinting at a recurring subscription with no user involvement. Rupert Murdoch, describing The Daily, said that "we completely reimagine[d] our craft". As one of the biggest news companies in the world, expectations are high for when The Daily launches later today. 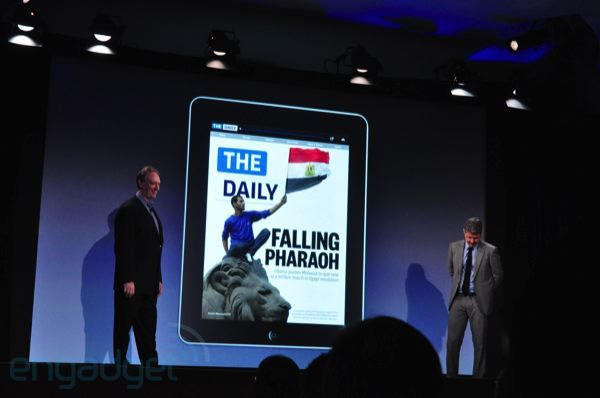