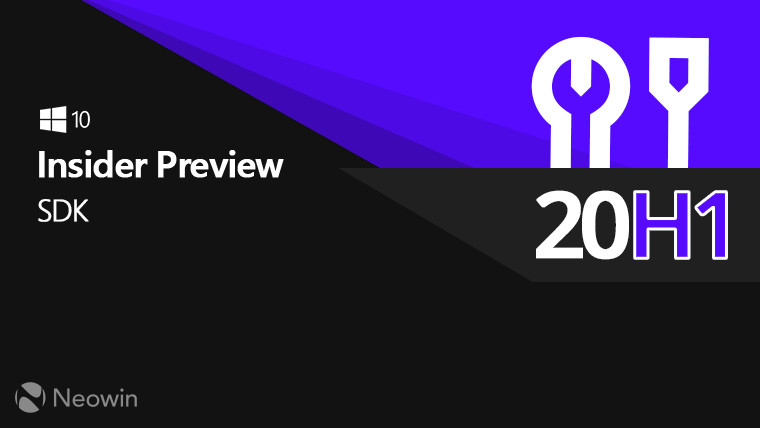 Microsoft is already preparing the 20H1 update for Windows 10, which is set to be released early next year, and a few builds of the OS have been released for Insiders so far. Today, Microsoft also released the first preview build of the Windows 10 SDK in preparation for the 20H1 update, and it's build 18890.

This is the first build to be released after the SDK for the Windows 10 May 2019 Update was finalized, and as such, it's also the first one in a while to actually have some new changes. Among the news are updates to the Message Compiler, Windows Trace Preprocessor, and more:

Now avoids one-definition-rule (ODR) problems in MC-generated C/C++ ETW helpers caused by conflicting configuration macros (e.g. when two .cpp files with conflicting definitions of MCGEN_EVENTWRITETRANSFER are linked into the same binary, the MC-generated ETW helpers will now respect the definition of MCGEN_EVENTWRITETRANSFER in each .cpp file instead of arbitrarily picking one or the other).

Now supports Unicode input (.ini, .tpl, and source code) files. Input files starting with a UTF-8 or UTF-16 byte order mark (BOM) will be read as Unicode. Input files that do not start with a BOM will be read using the current code page (CP_ACP). For backwards-compatibility, if the -UnicodeIgnore command-line parameter is specified, files starting with a UTF-16 BOM will be treated as empty.

Behavior change: tracewpp now converts all input text to Unicode, performs processing in Unicode, and converts output text to the specified output encoding. Earlier versions of tracewpp avoided Unicode conversions and performed text processing assuming a single-byte character set. This may lead to behavior changes in cases where the input files do not conform to the current code page. In cases where this is a problem, consider converting the input files to UTF-8 (with BOM) and/or using the -cp:UTF-8 command-line parameter to avoid encoding ambiguity.

In C++ code, the TraceLoggingWrite macro has been updated to enable better code sharing between similar events using variadic templates.

There's also one breaking change, which is the removal of irprops.lib, so developers linking to it will now have to link to bthprops.lib instead. Additionally, the build brings a number of new APIs since Windows 10 version 1903.

As usual, it's worth noting that the latest SDK preview can be used side-by-side with previous SDKs and with Visual Studio 2017 or higher. You can continue to submit apps that target Windows 10 version 1903 to the Store. Additionally, this build will only work with Windows Insider Preview builds.