When Intel announced its Core i9 processors and the X299 platform that comes with it, many took it as an uninspired knee-jerk reaction to the AMD Ryzen Threadripper that will launch next month. Well, Intel has quietly added the core clock speeds of the upcoming behemoths to their official price list, and it's not as good as you would expect.

The Core i9 series will have multiple variants, but they only updated the lower of the two; the 10-core 7900X will come in at 3.3GHz, while the 12-core 7920X will only be able to muster 2.9GHz. Although these aren't too far apart in core clock speed, it still leaves a bad taste when the higher end processor costs an astounding $1189. This in comparison to the AMD range, which will come in at $799 for the same amount of cores, not to mention higher clock speeds. 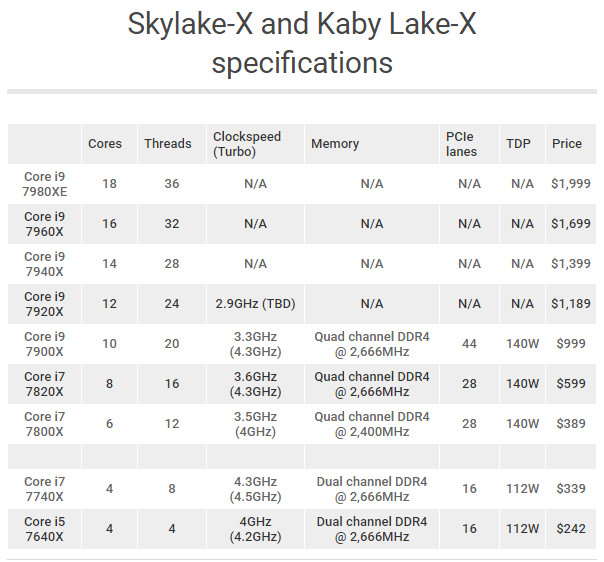 Intel also added other specifications, including the boost-clock speed of 4.3GHz for the 7900X with support for up to 44 PCI-e lanes and DDR4-2666 RAM. These processors will have a TDP of 140W, although the 12-core variant still needs to be confirmed.

However, once both the Core i9 and Threadripper platforms are released, we'll get to see who the actual king of the cores are after some real world testing has been done. It also remains to be seen what will happen to these clock speeds for the chips with even higher core counts, once Intel announces these at a later date.