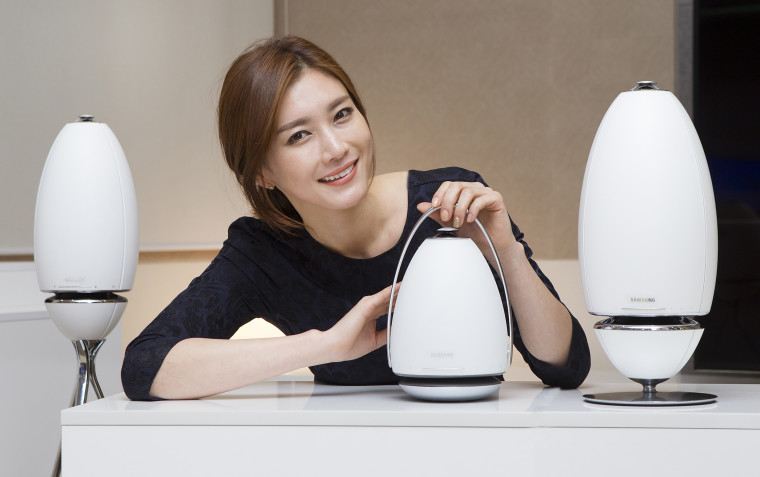 Some people still think that the world is flat. Samsung, on the other hand, is a big believer in curvatures. You only have to look at products like the Galaxy Note Edge, the 32 inch SE790C Ultra HD monitor, or the curved 105-inch 4K TV unveiled back in July, to see the evidence of that.

The company is preparing a number of cool things for 2015, like foldable smartphones, offering Playstation Now on their smart TVs, and teaming up with LoopPay against Apple Pay and Google Wallet. Just a week ahead of the CES (Consumer Electronics Show) next year, Samsung is offering a glimpse at two fascinating pieces of audio hardware.

The tech giant wants to expand its lineup of Curved Soundbars with two new models of wireless speakers, the WAM6500 and the WAM7500; their design resembles the turrets found in the popular game named Portal. They feature built-in batteries, can easily connect to TVs and mobile devices, and are said to offer superior 9.1 channel surround sound, thanks to the "Ring Radiator” at the bottom of the device; it is supposed to spread the sounds to flow in a 360-degree radius.

“With the new WAM7500/6500 people can enjoy a vibrant sound wherever they are, while our new Curved Soundbars perfectly complement the TV viewing experience”, said Jurack Chae, Senior Vice President at Samsung Electronics. There is no word on pricing yet, but these will probably come for a premium.

Do you like the concept behind these products? Let us know what you think in the comments section below.