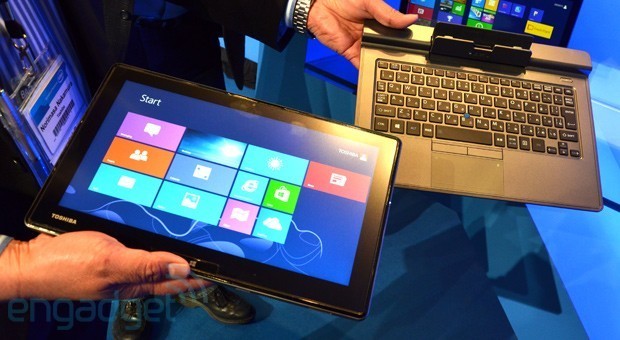 Mark Whittard, managing director of Toshiba Australia, believes Microsoft confused consumers when it launched both Windows 8 and the ARM-designed Windows RT operating systems at the same time last fall. He made those remarks earlier this week at a press event where the company showed off their new lineup of Windows 8 tablets and notebooks.

The Australian reports that, according to Whittard, "I think one of the challenges is, there was a lot of confusion with Windows 8, my personal view is that they (Microsoft) confused the market with a couple of different flavours," Toshiba at one time was going to offer its own Windows RT tablet for sale in time for the launch of the OS, but later decided to cancel those plans.

Whittard added that Windows 8 notebook prices have been much higher than new Windows 7 laptops and that price difference widened when Toshiba discounted Windows 7 PCs in order to get rid of their inventory. "They were going even cheaper than the traditional RRP (recommended retail price), so the gap wasn't just the $100 or $200 from non-touch to touch, it was $400 and the customer's going, 'Hang on a sec, that’s starting to get unpalatable, that price differential, and I’m not sure about this Windows 8 thing,'" he said.

The good news is that Toshiba is now going forward with new Windows 8 products, including a high end X-Series Qosmio laptop with an GeForce GTX 770 graphics chip with 3 GB of RAM, along with two 1 TB hard drives and a dedicated SSD. It will also launch the Portege Z10, a tablet with a detachable keyboard, shown above.

Source: The Australian | Image via Engadget