NM Electronics only lasted about a year before the name got changed to Integrated Electronics – Intel, for short. Just three years after its founding, when Intel introduced the world’s first commercially available microprocessor, the Intel 4004, their reputation was sealed. Not only was it their first big break, but it also heralded the start of a new era. 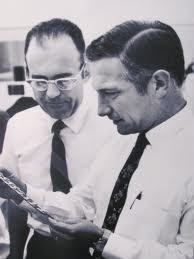 Intel was founded in Mountain View, California, which is now home to another tech giant, Google (above: Intel co-founders Gordon Moore, of Moore's Law fame, and Robert Noyce, co-inventor of the semiconductor)

Advanced Micro Devices, on the other hand, was founded a year after Intel, in 1969, by a larger group of ex-Fairchild execs, like Jerry Sanders, Ed Turney, John Carey, Sven Simonsen, and Jack Gifford. It took fate a few years to wave the two threads back together, but before long they would end up competing with one another. Ironically, one of AMD’s earliest microprocessors (like Intel, their earliest products had been in other markets), the AM9080, was an unlicensed clone of the Intel 8080. By 1976, the two had agreed to cross-license their patents.

Although you would think that would’ve soured relations between the two chipmakers for good, it actually worked out in Intel’s favor. It would see its first pathway into the consumer market in 1982, when IBM started looking for someone to supply microprocessors for the IBM PC. As it turned out, IBM’s corporate policy was to require at least two sources for its chips. This might’ve been a problem for Intel if AMD hadn’t already ripped off their architecture. The two ended up signing a contract to work together to supply IBM. 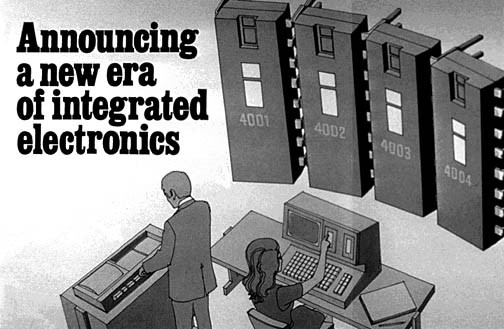 Before the PC, microprocessors had been a side business for AMD and Intel. Now they were front and center. Before long the PC market was bigger than IBM, and things weren’t so rosy between AMD and Intel. By the mid-80s AMD felt held back by Intel, while Intel felt that AMD should be grateful for being offered the opportunity to work alongside them. In 1987 Intel terminated parts of their patent licensing agreement, launching the first of a long series of legal battles between the two chipmakers.

Long story short, the two stayed at one another’s throats for the next 20 or so years. AMD even brought an antitrust complaint against Intel before the European Commission in 2000. That’s pretty much the pattern for the next 5 years, actually, and it might not be without reason. In 2008, South Korea fined Intel $25 million for paying Samsung and other Korean OEMs to not use AMD chips. The EU followed suit, with a $1.45 billion fine, and a lawsuit in the US uncovered evidence that Intel was paying off US OEMs, too.

It looked like things were about to get nastier than ever, but anticlimactically, the two decided to settle their differences and put their disputes behind them. In hindsight, that was probably a good call, since today the two are facing more competition than ever before.

Mobile devices are encroaching on both firm’s x86 products, and even Intel’s longtime partner, Microsoft, is cozying up with ARM, a less powerful, more efficient architecture. Heck, just yesterday we got wind of a rumor that Apple might be considering moving some of its Mac line over to an ARM architecture. More than ever before, the two might need to watch one another’s back.

Intel’s Architecture Labs designed some of the of the PC’s most ubiquitous technologies, like PCI, USB, and AGP

Having a single architecture that’s used across a variety of systems, even as it is produced by different companies, gives us broad compatibility across systems and the benefits of friendly (and not so friendly) competition. It’d be a shame to lose that to an army of incompatible, proprietary systems, even in the name of better battery life.

If you’re interested in learning more about AMD and Intel, both have some pretty interesting corporate histories on their websites. Heck, if you’re ever in the area, Intel even has a museum at their Santa Clara, California headquarters. And back in 2009, when the two were settling their differences, The Wall Street Journal assembled an interesting timeline of their legal battles.

Intel controls the microprocessor market, but AMD has made significant inroads, too, especially in gaming: in 2006, they acquired ATI Technologies, the company behind the world’s first 3D graphics card (above: AMD's founders and early staff)

And last but not least, there’s one really big elephant in the room that we’re not even gonna think about touching… which is better, AMD, or Intel? Let us know in comments box below!