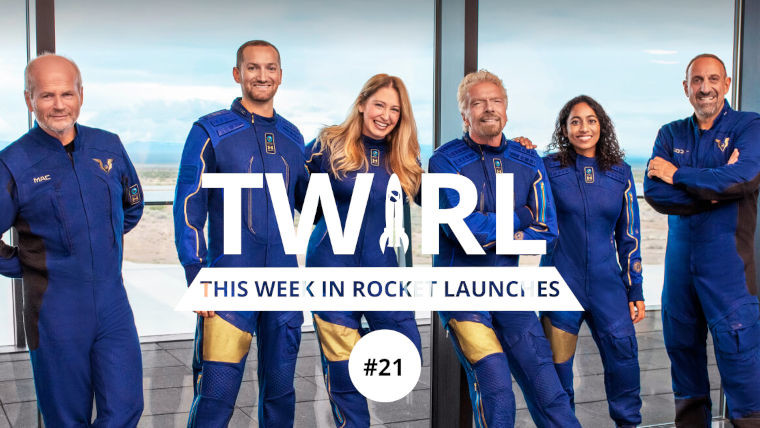 There are no set-in-stone launches scheduled for next week so in this edition of This Week in Rocket Launches, we’ll focus on Richard Branson’s trip to space and how to watch his launch attempt. There were also several rockets that blasted off over the last week so we’ll include footage of those launches in the recap section.

On Sunday, billionaire Richard Branson will be heading to space for the first time aboard his VSS Unity rocketplane. Interestingly, this craft doesn’t launch from the ground but instead is deployed from an airplane midflight. The test flight is dubbed Unity 22 and will carry a full crew of two pilots and four crew members, including Branson. Joining him will be cabin lead Beth Moses, lead operations engineer Colin Bennett, and vice president of government affairs and research operations Sirisha Bandla. Piloting the craft will be Dave Mackay and Michael Masucci.

The first launch last week was a Long March-4C carrying the Fengyun-3E satellite, you can see the launch below:

To learn more about the Fengyun-3E meteorological satellites, check out this video:

The second launch of the week was also a Long March rocket, this time the CZ-3C variant carrying the fifth Tianlian 1E satellite. This satellite network is interesting as it stays in geostationary orbit and relays messages between ground stations and orbiting satellites. You can view the launch here:

The third and final launch of the week so far was of a Long March CZ-6 carrying the Ninxia 1 Earth observation constellation into orbit. These satellites are commercially operated electromagnetic spectrum signal monitoring satellites. The launch is viewable here: