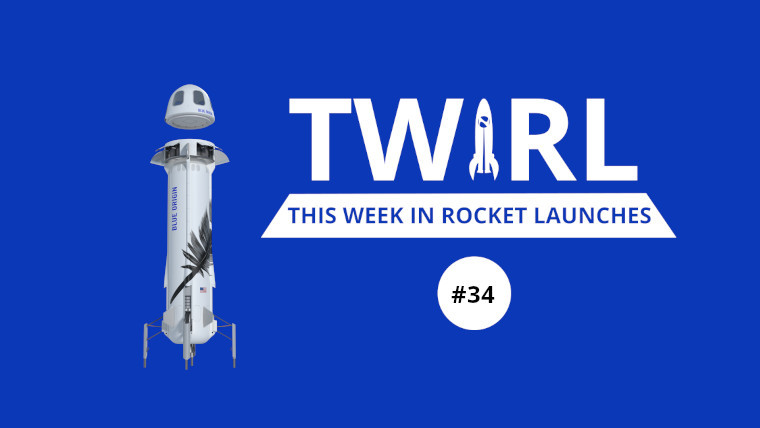 It has not been long since the last crew to the Chinese Space Station returned to Earth but now three more taikonauts are preparing to go aboard. Also this week, NASA is launching its Lucy spacecraft to visit some of Jupiter’s Trojan asteroids and Blue Origin will be launching its second crewed New Shepard mission which will be carrying William Shatner, famous for playing Captain Kirk in Star Trek: The Original Series, among others.

The first launch of the week will come on Tuesday at 1:30 p.m. UTC. Blue Origin will launch its New Shepard suborbital rocket from the West Texas suborbital Launch Site. It’s the second crewed mission that the rocket will perform and its crew will consist of William Shatner, Chris Boshuizen, Glen de Vries and Audrey Powers. As the craft is only capable of suborbital flights so their mission to space will be quite brief but they will experience low gravity.

At 9:40 a.m. UTC a Soyuz 2.1b rocket carrying OneWeb internet satellites will take off from the Vostochny Cosmodrome. There will be 36 satellites aboard which will work in conjunction with the rest of the OneWeb constellation. OneWeb beams internet back down to Earth helping customers get online in hard to connect areas.

At 4:24 p.m. UTC, China will launch a Long March rocket carrying Shenzhou 13 from the Jiuquan Satellite Launch Center. Aboard will be three taikonauts, Zhai Zhigang (the first Chinese citizen to perform a spacewalk), Wang Yaping (the second Chinese woman in space) and Ye Guangfu. This is China’s eighth crewed space mission and the second to the Chinese Space Station since it began operations earlier this year. For a couple of days, the number of people in space will reach 12, which is higher than average.

The final launch of the week will be exciting; an Atlas V rocket will launch from Cape Canaveral carrying NASA’s Lucy spacecraft which will head out past Mars, past the Asteroid Belt out to Jupiter where it will explore the gas giant’s Trojan asteroids. These asteroids orbit the Sun in front of and behind Jupiter and are quite unique making them of interest to the space agency. The mission will last about 12 years.

The craft was named Lucy after a hominin skeleton because these Trojan asteroids could be the ‘fossils of planet formation’ that give us a better understanding of how our and other star systems develop.

The only launch last week was the Soyuz rocket carrying an all-Russian crew to the International Space Station. You can see the launch below.

The crew also docked with the ISS, you can see footage below.

Update: Shatner's flight has now been delayed due to winds and will instead launch on Wednesday at 1:30 p.m. UTC.