This February, a flashy new Twitter profile redesign was spotted by a few keen users. Twitter representatives didn't officially comment on the feature, but soon the new profile design began to appear more frequently, and eventually every newly-created Twitter account received it. Now, while Twitter is still rolling out the new profile in waves, any user may opt to change their profile from the old to the new. 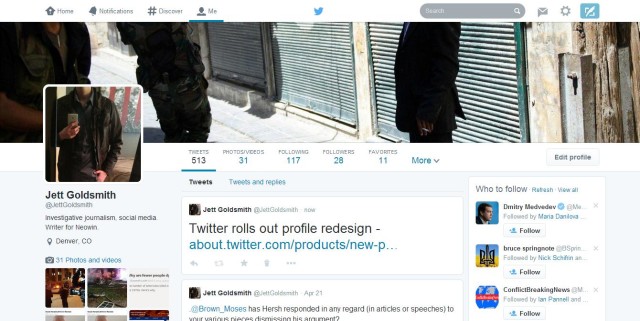 Twitter's profile redesign has been compared by many to Facebook, and it's similar in a few ways. The redesign heavily features pictures and a monochromatic, magazine-style "vertical flow" theme which allows for more eye-catching text and images, something which Twitter significantly lacked in previous iterations of its theme. That being said, the new design is still very much unique. Profile pictures are much bigger, and the right-hand sidebar features a very prominent "who to follow" section, something which is key to Twitter's identity.

In addition to the visual redesign, Twitter has also implemented a new functional feature: The ability to highlight any tweet you want by pinning it at the top of your profile. Previously, the most recent tweet (or retweet) would appear at the top of your profile, but now any tweet which you want to showcase can be pinned at the top instead. One small nuance: You can only pin your own tweets, not those of other users, so if you want to bring attention to someone another post you'll have to retweet it like normal.

Users may choose to wait for the new profile to be rolled out by Twitter, but if you want to get it now you can click here and experience it firsthand.